Start a Wiki
When Batman started his crime-fighting career, he didn't possess many of the gadgets and elements he usually relies on for his missions. The Batcomputer was one of those elements. At first, Batman used a television as his main source of information in the Batcave. There were various other machines w

The Batcomputer is one of the most highly advanced computer hardware systems in the entire world.

When Batman started his crime-fighting career, he didn't possess many of the gadgets and elements he usually relies on for his missions. The Batcomputer was one of those elements. At first, Batman used a television as his main source of information in the Batcave.[1] There were various other machines which served different purposes as well, including the remote control surveillance monitors for the Batmobile and Batplane[2] and a radarscope to track down signals from their various tracking devices.[3][4] Shortly after, Batman created an electronic filing system in order to categorize and quick-search criminal profiles. The machine provided answers when Batman needed to cross-reference information about criminals.[5][6] Eventually, Batman decided to name this machine and called it the Batcomputer.[7] 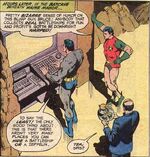 The first real Batcomputer was mounted in one of the walls of the Batcave. It featured a medium size monitor with a keyboard attached to the main structure of the computer. Since Batman only used the computer for quick search of information, there was no chair needed and most of the investigation was done standing up.[8] Shortly after this, the Batcomputer was upgraded to feature multiple monitors and keyboards. With its functionalities increased, a chair was included. When Batman was not present at the Batcave and required information from the computer, he often relied on Alfred or Robin to use the computer and find the info.[9] The size, design and capabilities of the Batcomputer have changed over the years and there have been multiple versions of the equipment in the Batcave.

During the confrontation between Batman and Jean-Paul Valley, the Batcomputer was severely damaged after Jean-Paul plunged directly into the computer's monitors, creating an electric discharge and breaking the mainframe.[10] When the massive Cataclysm struck Gotham, the Batcomputer was one of the few items spared by the destruction.[11] When Hush broke into the batcave, he noticed that the computer was the size of a billboard while Alfred used the Batcomputer to activate the robotic T-Rex and set it to attack the intruder.[12]

After the Black Glove's attack on the Batcave, most of the monitors of the Batcomputer were damaged but not entirely useless. Batgirl used them to contact Robin and decipher one of the Black Glove's videos, where they reveal their master plan to destroy the Outsiders and Batman. Batgirl broke the computer's main monitor in a burst of rage.[13] Afterwards, she used the additional monitors to start a list of heroes that she considered good enough to replace Batman. However, Nightwing checked the computer later and disagreed with her idea.[14]

One of the early capabilities of the Batcave was to assemble a Batman figure on the grounds of Wayne Manor, whenever Batman and Bruce Wayne were required to appear at the same time.[15] The Batcomputer would also automatically update the information about the cave's schematics, security and entrances.[16] The Batcomputer was later connected to the police radio in order to be updated with crimes in progress.[17] The computer also had the capability of breaking into the digital databases of the government, which provided Batman with vital information to solve cases.[18]

The Batcomputer has multiple functionalities that a normal computer doesn't. It includes a microwaves transmitter, which can create any frequency on any range.[19] It also has a direct connection to all TV broadcasts which is useful when there are important events being transmitted live.[20]

The Batcomputer has a direct link to the Brother Eye satellite, and was once co-opted in order to take remote command of the various OMAC agents.

The Batcomputer of the second Batcave at Wayne Enterprises has a direct connection to the Bat-Radia and had access to the security system of Arkham Asylum, making it possible to lock the exits of the building remotely.[21]

A modern version of the computer was able to project holograms of people. This function was used as a communication tool.[22]

This Batcomputer was a super computer that was located in the Batcave beneath Wayne Manor. The Batcomputer was extremely advanced and could perform an innumerable amount of functions. Some of these functions include: analyze and match sounds,[23] tracing signal relays,[24], analyze and match evidence,[25][26][27] and many others. According to Alfred it was worth $50 million dollars.[28]

This Batcomputer is known as the Bat-Wave. It is a highly advanced computer network system located in the Batcave that can download information from various external databases including the GCPD's crime files. Batman carries a miniature PDA which can interface directly with the Bat-Wave. He can also connect to the Bat-Wave via the digital system installed in the Batmobile.[29] Before Commissioner Gordon became an ally of Batman, the Bat-Wave was his primary source for major crimes occurring in Gotham City.

The Bat Computer is capable of creating extremely complex artificial intelligence, as Alfred is able to program a replication (his "brain algorithms") of himself that can be conversed with.[30]

Retrieved from "https://dc.fandom.com/wiki/Batcomputer?oldid=2694738"
Community content is available under CC-BY-SA unless otherwise noted.