Sometimes I wonder if I'm even human anymore. Sex, love... even the slightest yearning I've repressed and rechanneled into the Almighty Will. How perverse it feels in her presence. Every relationship was a charade, or some reluctant excursion I knew I would never complete. Vicki, Silver, Talia... Selina. She would last the longest because she was safe. She was the enemy. She would always be the enemy. My criterion for a relationship. So many women. All those pretty party girls, their sweet smiles and simple hopes. But once the photo ops were over, so were they. Back in the limo, back to wherever they came from. I'm sure they wondered what went wrong. "Was it something I said? Did I come on too strong? Too clinging?" Never knowing they stood a better chance with Freeze. The day I put this on was the end of me. Gotham would be safe, but there would be no rescue for Bruce Wayne. No love. No family. No real intimacy. No real losing oneself in someone else. Not in this life.

Batman is probably the character with the highest number of romantic relationships in the DC Universe. Unlike Superman and Wonder Woman, characters that have been in publication for as long as Batman, the Dark Knight has never had a long-standing leading partner and instead, he has been constantly switching interests when it comes to romance. This is due to the nature of Batman's character; it is difficult for him to maintain a serious relationship with a woman as a result of his obsession with his crusade against crime. On the other hand, Bruce Wayne, Batman's alter-ego, has managed to have a few relationships with ladies of his interest, but they always come to a rather abrupt end because of the lack of trust and constant absence shown by Wayne. He has cemented his reputation as a notorious playboy, a false perception he has created himself.

In the Golden Age, Batman had a couple of short relationships as Bruce Wayne, such as Julie Madison and Linda Page. He would often flirt as Batman with occasional villains, one of which was Catwoman. The strong influence of Superman's success motivated the creators of Batman to introduce a serious female figure who could eventually become Batman's partner. Thus, Vicki Vale was introduced as an answer to Superman's Lois Lane, but these efforts proved futile as the character wasn't developed in the right direction. In the Silver Age and in response to various allegations which caused the Comics Code Authority to be created, Batman was given a female counterpart. In time, however, Batwoman also became a caricature instead of a serious persona. By the end of the Silver Age, Bruce Wayne started seeing other women with no serious intent of starting a relationship. In the first years of the Bronze Age, Batman had only one romantic interest, Talia al Ghul, but they were often at odds and the relationship never became serious. It wasn't until the mid-70s that some writers started taking Batman's love life more seriously. Silver St. Cloud, Natalia Knight and Julia Pennyworth were introduced while other characters were re-introduced, like Vicki Vale and Catwoman.[citation needed]

In the Modern Age of Comics until the present date, Batman has had numerous romantic relationships, in every different media, some of which have lasted long enough to set a "record" and others which were merely used for the sake of a story. Most of his relationships are with ladies from his own Rogues Gallery, and in recent years, his relationship with Catwoman has been given special attention; but the constant in every scenario is Batman's unwillingness or inability to maintain a relationship longer than the Batmobile's paint job.[citation needed]

Following is a list of those romantic partners that have been prominently portrayed in comics books and other media: 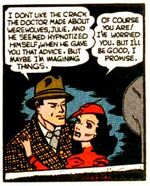 Bruce and Julie
"Bruce, you're not all alone anymore. Not as long as I'm around."
- Julie Madison[2]

The first woman ever to date Bruce Wayne, Julie debuted in the Golden Age. Julie Madison was originally an actress, but her character was changed many times in the following decades.

Batman and Vicki
"You puzzle me, Bruce! Sometimes I wonder if you're really the socialite playboy you pretend to be!"
- Vicki Vale[9]

A photographer/reporter, Vicki Vale was initially introduced as a woman smart enough to expose Batman's secret identity. In this quest, she became involved with Bruce Wayne, as she suspected him of being Batman and she was determined to find evidence. Her character has undergone few changes over the years, and many elements of her original characterization have remained.[citation needed] 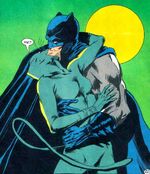 Bat and Cat
"You and me. The two orphans lost. Who see the weak in one another."
- Selina Kyle[10]

Batman's relationship with Selina Kyle, the Catwoman, is the most enduring and iconic of his relationships. Unfortunately, their unconventional lifestyles and personal choices have often caused them to grow apart from each other, although there have been many stories in which the two of them have decided to form a serious relationship.

Batman and Talia
"It is true, you know! There is no man your equal-- therefore, you are the only man I can love!"
- Talia al Ghul[17]

The daughter of the supervillain Ra's al Ghul, Talia's father has encouraged his daughter's relationship with the Dark Knight in hopes of recruiting Batman as the successor to his League of Assassins. Talia is also notable as the mother of Bruce's son, Damian Wayne.[citation needed]

This list includes all those women who have sporadically appeared as romantic partners of Batman:

Retrieved from "https://dc.fandom.com/wiki/Batman%27s_Love_Interests?oldid=2794569"
Community content is available under CC-BY-SA unless otherwise noted.