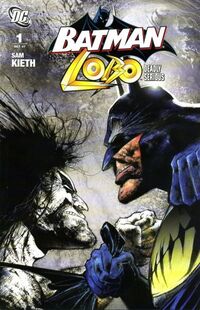 Batman/Lobo: Deadly Serious is a two-issue limited series published in August and September of 2007, and pairs up two of DC's more popular characters, Batman and Lobo. Both issues were published in a 48-page squarebound prestige format. The DC Comics sales solicitation described the title as follows: Get ready for an action-packed 2-part tale teaming up the Dark Knight with the interstellar madman, as only Sam Kieth can deliver! Batman, transported to an alien vessel by a mysterious figure, is asked to help cure a plague that has infected its inhabitants. Lobo, who has also been shanghaied, finds himself in the same boat. Now, Batman and Lobo, two incredibly unlikely companions, must somehow find a way to work together - and find out the real reason for their abductions - before they kill each other!

Back to Comics Contents : Comics B : Batman/Lobo: Deadly Serious Vol 1

Retrieved from "https://dc.fandom.com/wiki/Batman/Lobo:_Deadly_Serious_Vol_1?oldid=2296744"
Community content is available under CC-BY-SA unless otherwise noted.