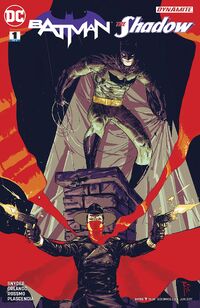 Batman/The Shadow was a six-issue limited series published in 2017. It was an Intercompany Crossover, published jointly by DC and Dynamite Entertainment (who owned the license to the Shadow at the time) and it was followed by the 2017/2018 limited series, The Shadow/Batman.

Back to Comics Contents : Comics B : Batman/The Shadow Vol 1

Retrieved from "https://dc.fandom.com/wiki/Batman/The_Shadow_Vol_1?oldid=1967480"
Community content is available under CC-BY-SA unless otherwise noted.