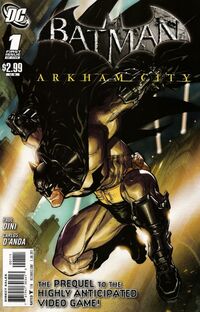 Six months following the events of Arkham Asylum, Quincy Sharp has been elected mayor of Gotham. At the same time, a criminal duo named T&T enhanced with Titan has been wreaking havoc, weakening Two-Face's criminal organization and crippling the man himself. The duo's crime spree ends with a suicide attack on the new Gotham City Hall - an act of terrorism that prompts the formation of Arkham City. Considering these events, and the motivations behind them, Batman theorizes that both the attacks and the mayor's initiative were orchestrated by someone else.

While preparation continues on Arkham City, Batman breaks into Quincy Sharp's mansion to investigate his plans. Confronted by non-lethal security measures, Batman realizes that he is being tested by Sharp's unseen master, and flees the mansion. At the same time, Joker is revealed to be dying as a result of complications from the Titan drug, with an estimated six months to live. Taking advantage of Joker's weakened state, several Arkham Guards try to kidnap and kill him. Hearing rumors of the plot, Harley Quinn takes the place of one of the guards, and rescues Joker. Harley and the Joker are thrown from their escape boat when Batman attempts to recapture them.Landing within the borders of the new asylum's construction zone, Joker declares himself and Harley the "mayor and mayoress" of Arkham City.

Disguising himself as career criminal Lester Kurtz, Batman investigates the gangs forming in the city. After passing tests from both supervillains, Batman signs up with both Joker and Penguin. Penguin sends "Kurtz" and several other criminals to steal guns from TYGER, the mercenary unit guarding the city.

The heist goes awry when the Joker's thugs interrupt, and Batman takes the opportunity to destroy the weapons with a grenade. Despite his failure, Penguin decides to let "Lester Kurtz" live so that he can lead a strike force against the Joker only to have him escape. Batman leaves Arkham City in a disguised Batboat, unaware that he is being watched. When he attempts to return, Batman is attacked and cornered by highly-trained TYGER units, meant specifically to match him move-to-move.

Nearly defeated, Batman is rescued by Catwoman, who is in Arkham to steal valuables and make strong allies (in this case, Poison Ivy, who she had freed from a prison transport). Soon afterwards, Batman tracks down and interrogates a TYGER guard, who reveals that Sharp - and, in turn, both Gotham and Arkham City - is controlled by Hugo Strange. Elsewhere in the city, Joker is trying to prolong his inevitable fate by seeing a string of doctors.

The latest doctor explains that Joker has been poisoned by a mutated form of the Titan formula, and presents him with a weaponized form of the Titan toxin. Hours following Batman's discovery of Hugo Strange's identity Batman gathers all available, and rather incriminating, information on him. However, Strange is one step ahead and has Sharp announce his involvement in the Arkham City Project in order to prep an alibi against Batman/Bruce Wayne's accusations. He further boosts his popularity by secretly releasing Zsasz and having his forces recapture him, proving that The Gotham Police Force are weak and obsolete and giving TYGER a defining reputation.

Hugo Strange's goal is revealed to be to seize complete control over Gotham City and use Arkham City and TYGER, who are also under Sharp's mind control through hypnosis techniques, as a way to eliminate other super-villains. With all the criminals in Gotham either fleeing the city or being locked up in Arkham City to fight to the death, Strange intends to become the leading power not only in Gotham's political affairs, but also in the criminal underworld. By this point, Strange has even concluded that Bruce Wayne and Batman are one and the same and intends to make use of TYGER, Arkham City, and several alliances he made with other villains to take everything Batman has, break his spirit, destroy him, and take his place and obtain the legend of Batman for himself, becoming, in his own words, "immortal", with Gotham City as his own personal domain.

Back to Comics Contents : Comics B : Batman: Arkham City Vol 1

Retrieved from "https://dc.fandom.com/wiki/Batman:_Arkham_City_Vol_1?oldid=2555886"
Community content is available under CC-BY-SA unless otherwise noted.