"Army of One": Two-Face has learned that his arms shipment had been stolen and he assumes that the responsible is Penguin. Meanwhile, Penguin is informed of the events and that Two-Face blames him for the attack. Cobblepot then realize

No one can be him. But someone can represent what he stood for. The ideals that made Batman-- justice, consequence and ironclad resolve to protect. And there is none other that has the wherewithal to uphold those ideals than you... Richard Grayson.

Synopsis for "Army of One"

Two-Face has learned that his arms shipment had been stolen and he assumes that the responsible is Penguin. Meanwhile, Penguin is informed of the events and that Two-Face blames him for the attack. Cobblepot then realizes that there is a third player in Gotham and he is determined to make them pay.

At that moment, Nightwing and Damian are confronted by the vigilante who has been posing as Batman and killing criminals across the city. Nightwing chases the impostor, who seems to know everyone's secret identity in the Bat-Family. After a brief chase, Nightwing finally deduces that this impostor is none other that Jason Todd, who was his successor as Robin. Damian tries to help and he attacks Todd from behind, but he only managed to anger him and in response, Todd shoots Damian in the chest. A plane hovers above their location and from it descend Huntress along with Black Canary to help. Nightwing takes Damian to them and he allows Todd to escape.

Later, at Black Mask' secret hideout below the city, the criminal mastermind is organizing a plan of action. His plan involves Jane Doe, Firefly, Adam Bomb and several other Arkham fugitives.

Moments later, Jason Todd patrols the West Side of the City, killing all the Black Mask enforcers and striking fear into the hearts of criminals by crippling them and torturing them for answers before finally eliminating them.

Just then, Tim Drake, who took one of the Batsuits from the cave and prowls the sreets as Batman, finds himself on the collapsed ruins of a subway tunnel system and he follows a mysterious sound that takes him to a place that looks like a make-shift Batcave. Tim realizes almost at once that the place was constructed and designed by Jason Todd and he deduces that he is also the man who has been impersonating Batman. As Tim walks further into the place, he triggers a security measure and a bomb explodes, kocking him off the edge of a chasm. Tim tries to get a hold of something and he is suddenly saved by Catwoman, who followed him, thinking that he was the bag guy impersonating Batman.

At the same moment, Dick is in the real Batcave, and he has taken Damian to be healed by Alfred. Dick feels guilt as it was his responsibility to watch over Damian and he almost let him die. Alfred recalls that Bruce felt the same way about all his protégés and Dick replies that he can't become Bruce, as he tried in the past, but failed. Alfred agrees on the fact that no one can be like Bruce, but someone must step up and represent the ideals he stood for, and there is no man better quialified for the job than Dick Grayson. 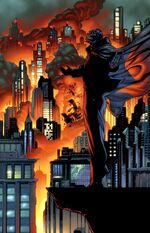 At the GCPD Headquarters, Commissioner Gordon is arguing with D.A. Hampton about the recent crimes involving Two-Face's missing arms shipment. Gordon is certain that Penguin is responsible, but Hampton refuses to give Gordon a an arrest warrant, as there isn't enough proof. While they are arguing, Mr. Zsasz has killed a police officer and peeled the skin of his face for Jane Doe to use it and impersonate the officer. As Hampton is leaving Gordon's office, one end of the GCPD HQ is completely demolished by a gigantic explosion created by Firefly and Adam Bomb. Gordon tries to warn Hamton to stay down, but Doe breaks into Gordon's office and kills Hampton before delivering a message to Gordon from "Two-Face" and then she shoots Gordon three times in the chest. However, Gordon survives thanks to his bullet-proof vest.

As Gotham City is burning in chaos, Black Mask enjoys the results of his master plan.

In the Batcave, Dick finally decides that it's time to take the mantle of the Bat, but when he approaches the room where all the Batsuits are in display, he finds that there is one suit missing with a note left by Tim. At that moment, Tim and Catwoman find some criminals, who were tortured to death in Todd's batcave, when he appears and knocks Catwoman unconscious. Tim and Jason start fighting and the struggle to keep the upper hand is hard for them both. Jason lures Tim into a trap room, where he can strike at Tim from any location as he is concealed by dark curtains. Once Jason manages to get the upper hand in the fight, he offers Tim a chance to join him as his Robin, but Drake refuses and gathering all his strength, he manages to reach a crowbar from the floor and starts beating Jason to a pulp. However, Jason just keeps laughing and Tim stops to ask him what is he laughing about, but he can't complete his thought, as he realizes that Jason had stabbed him with a Batarang in the chest while he was attacking him with the crowbar. Tim faints with the batarang still stabbed in his chest and Jason walks away, telling to himself that there is only one person left to kill.

Appearing in "Army of One"

Retrieved from "https://dc.fandom.com/wiki/Batman:_Battle_for_the_Cowl_Vol_1_2?oldid=2701228"
Community content is available under CC-BY-SA unless otherwise noted.