Changing is always harder than staying the same. It takes courage to face yourself in the mirror and look beyond the reflection. To find the you that you should have been. The you who got derailed by cruel childhood events. Events that took your life's natural trajectory and twisted it. Changing it into something unimaginable... or even incredible... giving you the courage to embrace you birthright, your destiny, and finally realize... that you are BATMAN. 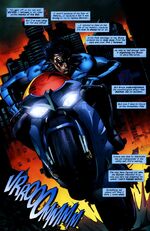 Nightwing travels across Gotham City to meet The Network and in the meantime, he starts thinking who could be the person responsible for the chaos and destruction created. He soon comes to the conclusion that whoever it is, is someone new and it must be stopped. He informs the Network about this new threat and he leaves Huntress in charge of the team to find and stop whoever is behind it all. While the Network are busy trying to locate the new villain, Nightwing gets on his way to find and stop and old acquaintance. As he rides on the Batcycle, Nightwing remembers that the only reason he has not taken the mantle of the Bat is because Bruce asked him not to on his last message.

In the meantime, Commissioner Gordon and Harvey Bullock try to gather and organize the survivors of Two-Face's attack on the GCPD Headquarters. Gordon tries to figure out the motivation behind Two-Face's attack, but Bullock reckons that the former District Attorney has gone beyond the limits of insanity. Whatever the reason it might be, Gordon knows that he has lost his city as the United States Army start arriving at Gotham and looking to take down all the organized crime.

At that moment at the Batcave, Alfred finds himself doing some routinary chores when he notices that Damian Wayne has waken up and is trying to sneak behind him. Alfred tells Damian that he is in no condition of going anywhere, but Damian refuses to listen and he insists to go out and help Dick. Alfred can't really oppose Damian's desire, but instead of letting him go all by himself, Alfred has called upon Squire to tag along Damian on the dangerous mission, much to Damian's disappointment. 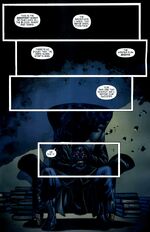 Just then, Jason Todd checks Tim Drake's body and moves what he believes to be Drake's corpse to a different place in his make-shift Batcave. While he does that, Vicki Vale is broadcasting live the tragic events that have been unfolding in Gotham for the past few hours. During her broadcast, she interviews Batman Jones, who is convinced that the current situation of the city is a result of Batman's absence and that things might only get worse. In a dark room, a figure turns off the TV and basks in the success of the chaos he has created. The man who wears the Black Mask is satisfied with the results of his unholy crusade. While all this happens, Two-Face is hiding on a hijacked police boat in the Gotham Canal. He is now convinced that Penguin is not responsible for the attack against him and he kills some of his trusted men for not preventing this chaotic situation.

Moments later, Nightwing finally arrives at the place where Tim's Batsuit was located last by Oracle, but her communicator starts losing signal as Nightwing goes deep down into the cave. When he is no longer able to listen to Oracle, Nightwing lits up a flare and a fire message starts burning in front of him. The message reads "Too Late" and a Bat-Signal on fire burns below it. Nightwing keeps walking forward and Jason's voice speaks to him, telling that Tim is already dead. Nightwing finds Tim's cape and cowl and picks it up, wihout knowing that it had been tampered by Jason to give electric shocks at his command. Nightwing is briefly stunned by the shock and Jason takes the chance to approach him and makes him the same request he did to Tim. Jason asks Nightwing to be his Robin. Nightwing recovers and starts fighting Jason, who is stil wearing his own Batsuit. In order to talk some reason into Jason's mind, Nightwing projects the last will hologram message from Bruce to Jason. In this message, Bruce tells Jason that he is his greatest failure but that he still hopes that Jason can recover. Jason doesn't want to listen to the message a second time and he starts fighting Nightwing again.

At that moment, Damian and Squire arrive at Jason's makeshift Batcave and start following Tim's batsuit signal with a GPS given to them by Oracle. After a brief discussion, Damian takes the lead of the mission and they soon find a boat to travel faster.

Nightwing and Jason keep fighting and Jason tries to keep Nightwing's attention off the fight by remembering him that Tim is already dead, but Nightwing doesn't believe Jason. The fight is almost even at all times, until Jason uses a capsule of Scarecrow's Fear Toxin on Nightwing. Dick had been inoculated against every variation of the toxin, but it still makes him dizzy and disoriented, allowing Jason to gain the upper hand of the fight for a moment. During this moments, Jason finally reveals the place where he had placed Tim's body, but fortunately, it is empty.

Tim survived Jason's attack thanks to the Batsuit's protection and walked away from the danger zone. However, he is badly injured and he realizes that he is alive thanks to a technique taught to him by Bruce. The possum reflex slowed his heartbeats enough to prevent blood loss and to make Jason think that he was dead. Tim is trying to escape from the place, but due to his condition, he collapses in the middle of the cave.

Nightwing tries to defeat Jason at that point, but the latter activates a detonator that starts several bombs in the place, causing it to collapse entirely. Jason escapes from the place and Nightwing follows him closely. As the cave starts collapsing, the place where Tim was laying down is also beginning to crumble, but he can't move fast enough and starts falling down to a chasm until he is rescued by Damian, who is hanging from a rope that is being hold by Squire.

Jason keeps on the run until he finds an exit to the subway system and Nightwing follows him there. Both of them land on a moving train and the battle continues. Jason finally takes off his cape and cowl and uses it as a distraction on the fight. During the fight, Jason explains that Dick doesn't deserve to be Batman because of his lack of desire to become him and also his poor job keeping Gotham safe. Jason reveals that the man who is behind the recent chaos is Black Mask, something that Dick thinks is not possible since Black Mask is dead. Nightwing finally realizes that this Black Mask must be someone else, but as he comes to this conclusion, Jason attacks and drops the cape on him, blocking his eyesight. Using only his instinct, Nightwing reacts just in time to kick Jason out of the train. Jason manages to get a hold of the rail tracks right above the river and Nightwing approaches him and tells Jason to grab his hand. Nightwing wants to save Jason and make sure that he is treated for his mental condition, just like Bruce wanted, but Jason turns down the offering and instead he chooses to jump off to the river, with the promise of coming back.

A few days later, Richard Grayson has finally come to terms with the fact that he is needed in Gotham, but not as Nightwing. With Alfred as his trusted butler and Damian as Robin, Dick Grayson becomes Batman and the Dark Knight returns.

Retrieved from "https://dc.fandom.com/wiki/Batman:_Battle_for_the_Cowl_Vol_1_3?oldid=2511654"
Community content is available under CC-BY-SA unless otherwise noted.