Bruce Wayne attended a Gala Ball in which he was approached by Haddie McNeil, a teenage girl who acted like she was an adult. After he dismissed her, Bruce learned as Batman that Haddie died from a drug overdose a few days later. Batman searched for the responsible and fo

Batman: City of Crime is a storyline written and illustrated by David Lapham with contributions from Ramon Bachs and Nathan Massengill. It was published in the Detective Comics series following the conclusion of the crossover Batman: War Games and it was followed by the crossover Batman: Face the Face. Despite being published after War Games, the events of the story takes place before that storyline.

City of Crime develops around the death of a young girl, which causes Batman to feel responsible for her death and becomes obsessed with the event. In his quest to redeem himself, he finds that there is a mysterious new enemy that lurks around the shadows and commands an army of supernatural entities. In order to learn the truth, Batman is forced to mix among the poor people of the city and the resulting chaos derived from Batman's absence is felt across the entire city.

Bruce Wayne attended a Gala Ball in which he was approached by Haddie McNeil, a teenage girl who acted like she was an adult. After he dismissed her, Bruce learned as Batman that Haddie died from a drug overdose a few days later. Batman searched for the responsible and found the drug distributors, putting them down. Immediately after this a fire started in Crime Alley and Batman summoned Robin to the place.[1] Together, they rescued some of the people trapped inside the burning building and Batman discovered a group of young girls who were all pregnant and couldn't be saved. Assuming it was kidnapping, Batman informed the police about the situation. However, hours later, the death of Haddie McNeil came back to haunt him as he learned that she was at Wayne Manor, looking for him, hours before her death and he never knew as he wasn't available at that moment. The guilt of not being able to help her caused Batman to seek redemption on the latest case of a missing girl, Cassie Welles.[2]

On his quest, Batman learned that Penguin and Mister Freeze are somehow involved in the crimes. Penguin tried to hide from his enemies, but he was attacked on the Iceberg Lounge by a mysterious assailant, after which the penthouse of the building was destroyed by a bomb explosion.[3] After learning of Penguin's fate, Batman tracked Mister Freeze, who might have kidnapped Cassie Welles. Meanwhile, Robin witnessed a strange behaviour on the people of Gotham as a new villain was revealed to be part of Penguin's crime ring: Ventriloquist and Scarface. Batman located Freeze, but before learning anything from him, they were both attacked by a large number of masked assailants.[4] 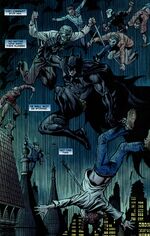 Batman fought them and discovered that the attackers weren't human, but instead were made of soil and belonged to a group called The Body. Shortly after this, people in Gotham were being killed and replaced with doppelgangers. After the confrontation, Batman tracked down Freeze, located the hideout and saved the kidnapped girl, who wasn't Cassie Welles. In the meantime, Seargeant Frank Ivers has found Cassie Welles, dead along with her boyfriend, which makes things worse now that his partner, Detective Lynch, has been replaced by one of the doppelganger creatures.[5]

Batman located the Ventriloquist and his gang, who had been massacred by The Body. Batman then learned of the apparent death of Cassie Welles and after going to analyze the corpse, Batman was attacked by The Body, as they were trying to eliminate him. Batman soon realized that the Welles were in danger and he went to their place to save them. He accomplished his goal but as a result he was surrounded by hundreds of creatures, part of The Body. Batman was eventually saved by the timely arrival of the Penguin, who shot the creatures and left the place with a word of advice for Batman.[6]

Batman decided to go to Crown Point and mix among the people of the neighborhood in order to reach the bottom of the mystery behind The Body. Bruce left Robin the duty to take care of Gotham in his absence while he donned the identity of Donnie Maloy and managed to get a job at the Gotham Waterfront Project, which allowed him to enter the town without raising any suspicion.[7] After a week of trying, Bruce found a way into the house of the leader of Crown Point and discovered that there's someting happening strange at the nearest park. Meanwhile, Robin was keeping safe Ventriloquist at the hospital and after saving him from an attack by The Body, Robin took him to another room along with a deranged Frank Ivers and summoned James Gordon to aid him on his mission.[8]

Hours later, Bruce witnessed a situation in which fear spread as a contagious disease among the building he was staying. When a homeless man was killed, the fear disappeared, but an ambulance arrived in time to prevent the death of the homeless man. Instead, they kept him alive and took him to the same hospital where Robin and Gordon were protecting Wesker and Ivers.[9] Bruce decided that it was time to enter Raleigh Park but when he tried to go as Bruce Wayne, the crippling fear returned and Bruce passed out. That nigh, Bruce took down the leader of Crown Point and called Alfred to bring him the Batsuit and any other elements he needed. Meanwile, the hospital turned into a battlefield between Robin, Gordon and The Body and the mayor told Commissioner Akins to turn on the Bat-Signal. However, Batman was going inside Raleigh Park and failed to see the signal.[10]

In the park, Batman discovered the main place where the dirt men were created and met with Mister Friendly, the man responsible for their creation. However, this man killed himself before revealing any information to Batman, but the Dark Knight already knew all he needed in order to stop The Body. Meanwhile, Robin and Gordon had fallen to the infectious fear and the entire hospital with them, leaving Frank Ivers as the only sane person. Batman left the park, ready for the final battle against The Body.[11]

Batman attacked The Body and lured them away from the city towards their own secret lair. Meanwhile, Frank Ivers killed the madman, source of the infectious fear and freed the city from the claws of death. However, the madness that Frank had to endure was too much for him to handle and after saving everyone in Gotham, he killed himself.

In the meantime, Batman gathered a massive number of creatures from The Body on their own secret lair and after a brief fight, Batman blew the place on a massive explosion, destroying The Body and their base of operations. Once the city was free from the threat, Batman deduced the identity of the killer of Cassie Welles and everything returned to normality; or at least, to Gotham's version of it.[12]

Retrieved from "https://dc.fandom.com/wiki/Batman:_City_of_Crime?oldid=2856080"
Community content is available under CC-BY-SA unless otherwise noted.