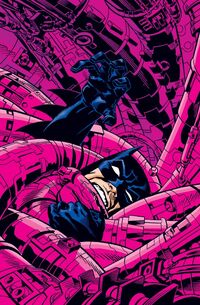 Batman: Cyber Revolution was a planned comic miniseries, meant to tie in with a line of toys created in partnership with Mattel. The first three issues were solicited, before both the series and the toyline were scrapped.

Batman: Cyber Revolution #3
(September, 2004)
Add a photo to this gallery

BATMAN: CYBER REVOLUTION #1
Written by Ron Perazza; art by Francisco Rodriguez de la Fuente and Aaron Sowd; covers by Michael Golden
In stores May 26. An all-new miniseries spotlighting Batman and a team of his allies as they head to the future! This tale, set in the not-too-distant future, ties in with Mattel's newest, most innovative toy line ever! The Joker has come into possession of a computer virus - one that will reshape the world in his own horrific image. Now Batman, Oracle, Nightwing, Robin, and Black Canary must battle armies of robots that have assumed the most nightmarish forms of Batman's famed Rogues Gallery.

BATMAN: CYBER REVOLUTION #2
Written by Ron Perazza; art by Francisco Rodriguez de la Fuente and Aaron Sowd; cover by Michael Golden
In stores June 23. The thrilling miniseries based on Mattel's newest, most innovative line of Batman action figures ever continues! Eight hundred years after the Joker plunged humanity into a techno-apocalypse and remade the Earth as a Mecha-Arkham nightmare, two teenagers fight for survival. Hunted by horrific Scarecrow robots, Leo and Pilot stumble upon a dormant Batcave…and awaken the B.A.T. defense! Now, under the protection of the amazing robotic Bat Knights, our heroes try to make their way to a safe haven!


Written by Ron Perazza; art and cover by Francisco Rodriguez de la Fuente and Aaron Sowd
In stores July 28. The miniseries based on Mattel's newest, most innovative line of Batman action figures continues! The futuristic robo-nightmare continues as Pilot, Leo and the B.A.T.Knights face their most terrifying foes yet. But even if they make it through the underground lair of the Killer Crocs, do our heroes stand a chance against the mechanized monster called B.A.N.E.?

Back to Comics Contents : Comics B : Batman: Cyber Revolution Vol 1

Retrieved from "https://dc.fandom.com/wiki/Batman:_Cyber_Revolution_Vol_1?oldid=2419208"
Community content is available under CC-BY-SA unless otherwise noted.