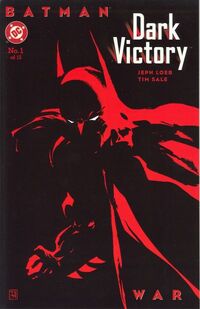 Batman: Dark Victory is a 14-issue limited series published between 1999 and 2000, written by Jeph Loeb and illustrated by Tim Sale. It is the sequel to their previous immensely popular limited series, Batman: The Long Halloween, and likewise met with fantastic critical review. Dark Victory also had a tie-in limited series likewise by Loeb and Sale, "Catwoman: When in Rome." Issue #1 and #13 are published in Prestige Format.

Back to Comics Contents : Comics B : Batman: Dark Victory Vol 1

Retrieved from "https://dc.fandom.com/wiki/Batman:_Dark_Victory_Vol_1?oldid=1895953"
Community content is available under CC-BY-SA unless otherwise noted.