"War Games: Act 3, Part 2 of 8: The Road to Hell": The criminals gathered at Robinson Park continue to spread out of the place into the city despite the GCPD efforts. Batman thinks about his perfect plan to c

Don't tell me -- you thought I was dead, such a surprise, blah blah blah... Really, Batman. It takes more than a tall building to finish off a legend. I thought you, of all people, would understand that.

The criminals gathered at Robinson Park continue to spread out of the place into the city despite the GCPD efforts. Batman thinks about his perfect plan to capture all the criminals in Gotham and how it went wrong. Batman keeps fighting the waves of criminals that decided to take a chance on him while the impostor posing as Orpheus keeps enticing them to attack Batman.

Meanwhile, Nightwing and Batgirl are on their way towards the theater where Batman is located and they race each other, getting there almost at the same time. Just then, Robin and Onyx arrive and join the battle.

At that moment, Tarantula leads the gang "Las Arañas" out of the park, but they encounter several police officers and have to make their way through by attacking them. The reports about Tarantula's escape reach Commissioner Akins and the other members of the GCPD, who stand outside the park, unable to believe that they had the chance to apprehend all the criminals in Gotham, but the chance was blown because of Batman. Akins tells his officers that Batman is no longer on their side.

At the park, Batman tries to reach the impostor and is attacked by Killer Croc. Robin gets rid of Croc allowing Batman to get to the main stage and attack the impostor posing as Orpheus. Batman hits the man twice in the face and the disguise falls apart, revealing Black Mask, who Batman believed to be dead. Black Mask explains that the fall from a tall building didn't kill him and Batman prepares to take him down when he is suddenly attacked by Scarecrow. 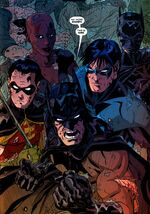 No more games. This is war.

Both Batman and Black Mask are surprised at Crane's intervention and Scarecrow explains that he was delighted by the sight of hundreds of criminals cowering in fear, all due to Black Mask's plan. Black Mask thanks Scarecrow and uses a smoke grenade to escape before Batman can reach him.

Black Mask escapes and the sky turns dark as it begins to rain. Batman stands in the middle of the battlefield while the rest of his team has already taken care of the criminals and are staring at their boss, who is silent under the pouring rain. Batman turns around and explains that this whole situation was a mistake, a plan that was intended to be an strategy game but was never meant to be set in motion. However, the plan was set in motion and the game has turned into a war that has left nothing but death and destruction. Batman addresses to his team and tells them that the games are over and that from now on, they are at war.

This is the second part of Act Three os the War Games storyline. The previous chapter is Detective Comics #799 and the story continues in Nightwing (Volume 2) #98.

Retrieved from "https://dc.fandom.com/wiki/Batman:_Legends_of_the_Dark_Knight_Vol_1_184?oldid=2639671"
Community content is available under CC-BY-SA unless otherwise noted.