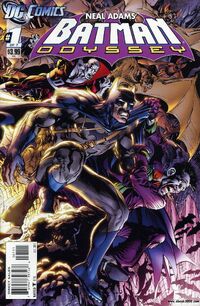 The series was published early in the Prime Earth era, but as a continuation of a New Earth series it is also considered to be New Earth.

Back to Comics Contents : Comics B : Batman: Odyssey Vol 2

Retrieved from "https://dc.fandom.com/wiki/Batman:_Odyssey_Vol_2?oldid=2083075"
Community content is available under CC-BY-SA unless otherwise noted.