"The Tally Man: Part One of Two": <div style="width:150px;float:right;clear:none;margin-right:10px;margin-left:10px;margin-top:5px;margin-bottom:5px;border:1px solid

"The Tally Man: Part One of Two"

The Tally Man: Part One of Two

I wonder-- did Bruce Wayne ever feel like that? Like his hatred for injustice, his rage against oppression, were going to burst out of him in an explosion he couldn't ever hope to control? Probably not.


Appearing in "The Tally Man: Part One of Two"

Synopsis for "The Tally Man: Part One of Two" 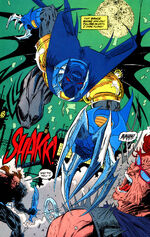 Batman thwarts a motorcycle gang in harassing an elderly man. However, he finds himself being more brutal than he intended, and he wonders if Bruce Wayne had ever struggled for control over his hatred for injustice. He realizes that unlike Bruce, he doesn't know his own limits, and wonders if there is a way to find out who or what he really is, beneath all of his masks.

Across town, one of the few remaining mob bosses in Gotham City, Big Mike Mahoon, celebrates his birthday. When he opens his giant cake, hoping to find a stripper inside, everyone is surprised when a villain called the Tally Man jumps out with guns blazing. The Tally Man claims he collects debts, but instead of money, he collects lives. Big Mike, his brother Johnny, and Batman are on his list, and when Mike fails to reveal Johnny Mahoon's location, he is killed.

Batman sneaks into Gotham New Age Supplies, where he hopes to use some isolation tanks to discover more about who he is. He removes his costume, expecting not to be disturbed, and submerges himself within the tank. Inside, he recalls how his father, a member of the secret and Sacred Order of St. Dumas, had been programming him with something called "The System" since he was a baby. The System indoctrinated him with all the skills needed to murder, and all the rules necessary for obedience. Unfortunately, Jean-Paul soon realizes that his father has also implanted a program in his mind that prevents him from learning the truth about himself.

Meanwhile, the Tally Man tracks down Johnny's girlfriend and learns that Johnny has been sent on a job to Gotham New Age Supplies. At the same time, Johnny arrives there only to find that the Batman is inside one of the isolation tanks, out of costume. They shoot the tank full of holes, but when they open it, they find nothing inside. Nearby, Jean-Paul emerges from a different isolation tank.

The Tally Man arrives at Gotham New Age Supplies, finding Johnny and his partner battered, bruised, and stuffed inside one of the isolation tanks. When he learns that it was done by the Batman, the Tally Man kills them. Outside, he tracks down Batman, and opens fire.

Retrieved from "https://dc.fandom.com/wiki/Batman:_Shadow_of_the_Bat_Vol_1_19?oldid=2296805"
Community content is available under CC-BY-SA unless otherwise noted.