"The Tally Man: Part Two of Two": Batman is put off-balance by an attack from the Tally Man, and he falls from the rooftop, gripping into the side of the building with his gauntlets despite the pain of doing so, and dangling there abov

Your quarrel wasn't with me! I'm not your puny Batman! I'm the punishing angel! Azrael-- Harbinger of death!


Appearing in "The Tally Man: Part Two of Two"

Synopsis for "The Tally Man: Part Two of Two"

Batman is put off-balance by an attack from the Tally Man, and he falls from the rooftop, gripping into the side of the building with his gauntlets despite the pain of doing so, and dangling there above the ground.

The Tally Man believes he has killed the Batman and falls into a reverie. As a boy, his mother and sister lived with him in squalor. Every Friday, a man would come demanding money from them despite the fact that they could barely survive on welfare cheques. His remembering is interrupted when Batman pulls himself back up and fires a series of shuriken at his attacker. Batman releases a phosphor flare, blinding the Tally Man and demands to know why he's been targeted. The Tally Man responds that Batman helped the Mahoons set up Joey Buto's murder. Jean-Paul realizes he's being targeted for a misinterpretation of Bruce Wayne's own involvement in the murder.

The blinding flash of the phosphor flare prompts another flashback for the Tally Man, in which his mother persisted in paying off his father's debt to a man who abused her. One day, when the collector beat his mother before his eyes, he became enraged and beats the man to death with a fire poker. He had been put in a facility for boys who commit violent crimes, where he was faced with further abuse. When he was finally released, he returned home to find his mother had hung herself, and his sister had died of starvation - a discovery which pushed him over the edge of sanity.

Meanwhile, Jean-Paul reflects on the fact that he has no idea who he really is inside. He knows he is not the Batman that Tally Man seeks. As he gets the upper hand, the pain and injury of his earlier fall suddenly catches up with him, and he collapses on top of the Tally Man. In a state of unconsciousness, Jean-Paul has a vision of his father telling him that he is Azrael, the angel of vengeance, and that he is not meant to die. Waking from his vision, Batman wraps his grapple around a beam supporting a water reservoir, and washing he and the Tally Man off the roof of the building. 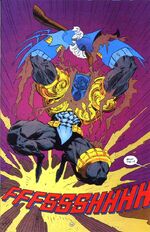 Jean-Paul loses control
Finally, The System takes control of Jean-Paul, and he beats the Tally Man within an inch of his life, screaming that he is not the Batman, he is Azrael, the Harbinger of Death. Just as he is about to make the killing blow, he stops himself, declaring that he is not a killer, and that no matter what happens, he won't kill. Looking down on the Tally Man's body, he realizes that he was much closer than he thought to bringing death.

After Batman staggers away, Bullock and Kitch arrive, answering a call from a nearby resident. Upon discovering the Tally Man broken and battered, but still alive, they are horrified by how violent the Batman has become.

Jean-Paul limps back to the Batmobile, with even more questions as to who or what he really is.

Retrieved from "https://dc.fandom.com/wiki/Batman:_Shadow_of_the_Bat_Vol_1_20?oldid=2296806"
Community content is available under CC-BY-SA unless otherwise noted.