"Manimal: Proving Ground": Manimal, the third disciple of the Armless Master is on his way to Gotham City to seek vengeance, while Bruce Wayne trains upon the grounds where they will meet in battle later that night. As the sun sets,

Do what the man says. Take me. I said, take me. Take me. Don't leave yet. I haven't finished with your lesson.

Manimal, the third disciple of the Armless Master is on his way to Gotham City to seek vengeance, while Bruce Wayne trains upon the grounds where they will meet in battle later that night. As the sun sets, Manimal sees a hawk take a bat in mid-air. A possible omen?

Night comes and Robin, unable to come up with answers about the medallion of St. Dumas, goes to Bruce's city apartment. They are joined by Nightwing and Bruce informs them both about the Order of St. Dumas, Azrael, and the System. Nightwing makes his feelings known for Bruce's selecting Jean Paul over himself in a playful manner, as hi usually does. Nonetheless, Nightwing and Robin agree to follow Jean-Paul and report all his activities to Bruce. Along the way both men subdue a gang fight.

Jean-Paul, still suffering hallucinations from St. Dumas, contacts arms dealer, Rudy Elzen, as a buyer of weapons and tells him to meet him alone. Batman confronts Rudy and inquires about Carlton LeHah, but Rudy tells him it's been months since anyone has heard about him. Rudy however did not come alone and quickly several of his men get the jump on the Batman. 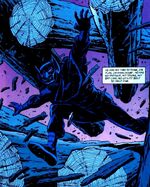 Third Challenge
However, he quickly recovers, slices Rudy's ear in half, and inquires again about Lehah, but again Rudy swears he knows nothing of his whereabouts.

In the meantime, Bruce returns to the fighting ground, donning the Mask of Tengu. Manimal has set up a trap in the form of fallen logs, which take Bruce by surprise. An intense battle takes both men to the river, but Bruce's skill prevails and comes up victorious. After the battle, a bat is seen taking a moth in mid-air.

Bruce heads to the top of Wayne Tower and remembers all those years ago of his first jump from the building. He feels confidant, but wisdom tells him he's not ready to return. Not yet.

Retrieved from "https://dc.fandom.com/wiki/Batman:_Shadow_of_the_Bat_Vol_1_29?oldid=2511787"
Community content is available under CC-BY-SA unless otherwise noted.