""Wild Knights, Wild City"": Bruce Wayne and Jean-Paul Valley hang dangerously on Selkirk's out of control helicopter with Catwoman on board heading straight for the [[Gotham Riv

Part of the "Batman: KnightsEnd" event.

Bruce Wayne and Jean-Paul Valley hang dangerously on Selkirk's out of control helicopter with Catwoman on board heading straight for the Gotham River Bridge. Nightwing and Robin take out the rest of Selkirk's goons on the street.

Catwoman bails out as the helicopter crashes on top of the bridge. A metallic wrench hits her in the head and knocks her unconscious, plunging to her death. Bruce leaves Jean-Paul's line and saves Catwoman from the fall. Nightwing and Robin clear the civilians from the street as chunks of the helicopter start to fall. 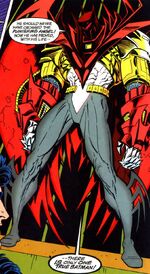 Jean-Paul catches up to Bruce and the two continue to fight on one of the bridge cables. Selkirk and his men are in the helicopter trapped as it emits electric sparks and fuel. Jean-Paul is about to burn Bruce, who sees the fuel coming down from the helicopter. Bruce pulls Jean-Paul in the path of the fuel, and Jean-Paul is dowsed in flames as he falls into the river. Bruce goes back up to the top of the bridge to rescue Selkirk and his men, which makes Catwoman realize that the real Batman has returned, while Nightwing and Robin try to find Jean-Paul's body, but he had already escaped.

Bruce and a reluctant Catwoman save Selkirk and his men. Catwoman insists Selkirk give up the neural enabler, but he throws it into the river. Just as all the men are saved the helicopter explodes.

Bruce immediately goes to the Batmobile to try to track down Jean-Paul, but unbeknownest to him Jean-Paul has rigged the car. As Bruce starts the engine, the Batmobile explodes. Nightwing and Robin turn around to see Jean-Paul, his metallic Bat-costume turned burnt red from the fire, taunting the duo that there is now only one true Batman!

Retrieved from "https://dc.fandom.com/wiki/Batman:_Shadow_of_the_Bat_Vol_1_30?oldid=2801465"
Community content is available under CC-BY-SA unless otherwise noted.