"Son of the Demon": When a group of criminals take hostages on a chemical plant in Gotham City, the GCPD summon Batman to assist them and the Dark Knight manages to stop the criminals, saving the hostages, but he ends up badly wounded after the confrontation.

"Son of the Demon"

Batman: Son of the Demon

Son of the Demon

I am cursed with a love for emptiness... desolation. It is a beauty to which my soul responds... as pure, as untainted as the deserts of my birth. I deem it my mission to purify this planet, to restore it to its former beauty... a mission I will brook no interference in.

Batman: Son of the Demon is a one-shot with a cover date of September, 1987.

Appearing in "Son of the Demon"

Synopsis for "Son of the Demon"

When a group of criminals take hostages on a chemical plant in Gotham City, the GCPD summon Batman to assist them and the Dark Knight manages to stop the criminals, saving the hostages, but he ends up badly wounded after the confrontation. On his way back home, Batman falls unconscious due to his wounds and he is found by Talia, who takes him back to the Batcave.

When Batman recovers, he and Talia speak to Commissioner Gordon, who informs them that the crooks who Batman stopped were trying to steal chemicals used in pluviculture for a terrorist only known as Qayin. In order to learn more about this technology, Batman visits his old friend, Dr. Blaine, but finds out that the man has been recently murdered. Following the only clues left behind, Batman deduces that the person responsible for killing Blaine is his long time enemy, Ra's al Ghul.

Batman and Talia travel to Ra's base of operations, where they learn that Ra's had in fact survived his previous encounter with Batman and is currently working to restore one of his Lazarus Pits. During their meeting, Ra's explains that he had nothing to do with Blaine's death, and when Batman asks him about Qayin, he learns that the terrorist had once worked for Ra's, but is responsible for the death of Melisande, Ra's' former wife and Talia's mother. Knowing that Qayin is their common enemy, Ra's asks Batman to join forces with him, but upon agreeing, Batman must also take Talia's hand. Since the two of them were previously wed by Ra's, Talia and Bruce simply embrace each other and have their first sexual encounter, after which Batman becomes an official member of Ra's family and starts acting as a leader for Ra's men.

Meanwhile, Qayin continues his plan of stealing a satellite from the United States Government, which is designed to control weather conditions. Joining forces with the rogue General Yossid, Qayin's hold of the satellite is secured, even though he has a few weeks to live, due to a strange illness.

The night of the sabotage, Qayin infiltrates the US military base, from where the satellite will be launched into space. At that same time, Batman, Talia and a selected group of Ra's men also infiltrates the base in order to place a bomb in the satellite. Batman and his team are discovered and they are attacked by the US forces, who also alert Qayin of their presence. The terrorist confronts Batman and manages to disable the bomb they placed on the satellite, just as it is launched towards space. Having failed their mission, Batman and Talia retreat back to Ra's base of operations, unaware that Qayin managed to get capture one of Ra's men. 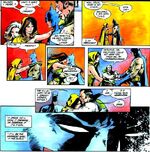 Upon returning to Ra's base, Batman is informed that Talia is pregnant with his child, who becomes his only concern in the world. Unfortunately, the man who was captured by Qayin is tortured to reveal the secret location of Ra's base and with this information, Qayin organizes a large scale attack on Ra's, taking dozens of his men to the place. Qayin and his army break into Ra's fortress and Batman's only concern is to protect Talia, which renders him innefective against the enemy. Qayin and his forces break into the core of Ra's base, where he finally finds the Lazarus Pit which will help him survive his disease. However, Ra's was prepared for such emergency and he destroys the pit with explosives he had placed prior to the attack. With Qayin seriously wounded, his forces retreat and he only manages to escape the place with great effort.

Back in his base, Qayin learns that the satellite is in orbit and with help from his rogue scientists, he takes control of the satellite, creating chaos and destruction near the Soviet Union. This actions would eventually create a war between Russia and the US, which is Qayin's ultimate goal. After killing General Yossid, Qayin gets full control of the operation and he speeds up the destruction.

Meanwhile, Ra's is planning his next move against Qayin and he wants Batman to take the lead, but the Dark Knight wants out of any plans until Talia is taken to a safe place. At that very moment, Talia falls unconscious and after taking her to the doctor, she reveals to Batman that she had lost their child as a result of the strain. Reinvigorated by the loss of his unborn child, Batman joins Ra's on his attack to Qayin's base.

In the ensuing confrontation, Batman and Ra's manage to infiltrate Qayin's base along with several of Ra's men, killing every opponent along the way. When Ra's and Batman reach the main chamber, where Qayin is operating the satellite, Batman commands Ra's to deactivate the satellite, while he confronts Qayin. The terrorist however, only wants to kill Ra's and gives little attention to Batman. This distraction gives Batman the edge he needs to defeat Qayin, giving Ra's enough time to destroy the machines that control the satellite and giving full control of the machine back to the US. Once the US have the satellite under their control, they decide to destoy it for good. In a desperate attempt, Qayin tries to electrocute Ra's, but Batman stops him and Qayin is electrocuted himself, ending his life.

With the threat of Qayin ended, Bruce returns to Talia, who tells him to leave her alone, as their relationship can no longer remain the same. Batman complies and he returns to Gotham and locates Blaine's killer, who was one of his co-workers, paid by Qayin. Having solved the case, Batman returns to the shadows and his grim attitude gives Gordon the hint that something is wrong with the Dark Knight, who spends the night in isolation on top of a building, wondering how different things would've been if his child had not died.

Nine months later, a newborn baby is given away on an orphanage and the baby is soon adopted by a couple, who promise to take care of him. The baby has the necklace that Batman gave to Talia after he learned about her pregnancy, giving away the fact that Talia didn't lose the baby, but she lied in order to have Batman help Ra's against Qayin.

For a long time, [DC] said [Son of the Demon] was out of continuity. Now it's just kind of out of continuity. I didn't actually read it before I started writing this. I messed up a lot of details, like Batman wasn't drugged when he was having sex with Talia and it didn't take place in the desert. I was relying on shaky memories. But now we have this new "Superboy punch" continuity [after Superboy Prime attacked the fabric of the universe during Infinite Crisis]. People still don't realize how important that single punch was to cover everyone's ass.

Retrieved from "https://dc.fandom.com/wiki/Batman:_Son_of_the_Demon?oldid=2511819"
Community content is available under CC-BY-SA unless otherwise noted.