Part of the "Batman: The Cult" storyline.

We're not coming back to Gotham... Never coming back. This city belongs to Deacon Blackfire. There's nothing we can do to help Gotham. It's all over. We've lost.

Gotham City has fallen into chaos caused by the underworlders led by Deacon Blackfire, who murder the city officials that oppose the Deacon's design. Meanwhile, Robin helps Batman overcome his mental breakdown as a result of the drug withdrawal. Batman manages to get a hold of himself and they start looking for a way out of the sewers, but Batman is still too weak.

The citizens of Gotham City are completely polarized with the events taking place, as half of the population condemns the crimes by Blackfire and his followers, while the other half praises the man for the way he has dealt with criminals. To make matters worse, Commissioner Gordon has discovered that Deacon Blackfire has criminal records going back to the 1920s, making the man more mysterious than initially thought.

The ranks of Blackfire increase as homeless people from all over the country start gathering in Gotham and join Blackfire's unholy crusade. The Deacon rejoices in his inner sanctum in the knowledge that all his previous trials and tribulations during the decades he's lived, have finally paid off.

At that moment, Batman and Robin have wandered for a long time in the sewers and they come across the sacred totem that turned Batman into one of Blackfire's followers. Not being under the influence of Blackfire's drug, Batman realizes that the totem has nothing special about it and it is also very small compared with the giant one he envisioned. To know that he was easily manipulated makes Batman doubt himself.

Without delay, Blackfire's followers steal an armory from Gotham, and Commissioner Gordon is forced to declare a state of martial law in the city with help from the Governor. Unfortunately, Gordon is shot and seriously injured during the announcement. Under these circumstances, the Governor is forced to act immediately and calls in the National Guard.

In the meantime, Batman and Robin continue to explore the sewers until they find a suspicious-looking chamber. Upon closer examination, they spot Deacon Blackfire bathing inside a pool filled with blood from corpses hanging above the pit. All the victims had been hanged upside down with their throats slit and Blackfire keeps smearing the blood all over his naked body while saying that this is his secret to eternal life. Batman and Robin try to sneak away unnoticed, but a soft noise gives away their location and Blackfire sends all the underworlders to capture the Dark Knight. Batman and Robin start running away through the sewers with a horde of Blackfire's followers on their trail. 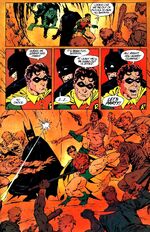 On the surface, the media and reporters take a stand amidst the chaos and one of them condemns Deacon Blackfire as a criminal, but during the live broadcast, the anchorman is killed and the signal is taken over by Blackfire, who talks to the people of Gotham, telling them that the criminals have prepared a conspiracy to remain in control of the city, but that he has the means to cleanse and purge the place while protecting them all.

Batman and Robin keep running and have used all the gadgets from Robin's Utility Belt, to no avail. When they are finally surrounded by underworlders, Robin decides it's time to fight the enemy and he challenges the thugs to fight while Batman only watches, paralyzed in fear. Robin lands a few powerful blows on the crooks, but he is quickly outnumbered and overcome. The sight of his young partner risking his life to save him, makes Batman come out of his shock and he strikes the criminals with relentless violence until they are all knocked unconscious. Grateful but shocked, Robin takes Batman and they continue their way out of the damned place. 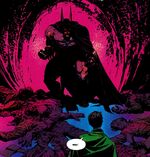 At that moment, the National Guard has arranged a plan to go into the sewers and force all the underworlders outside to put an end to their reign of chaos. Unfortunately, the enforcers are butchered once they break into the sewers and the underworlders proceed to attack them on the surface with the stolen weaponry. In light of these events, the Governor declares Gotham City as a disaster area and he recommends that the citizens evacuate the city immediately.

After this announcement, Blackfire realizes his dream has come true and he sends all his followers to the surface, where they can easily take over the city once most of the people have abandoned their places. When Batman and Robin get to the surface, they face the grim reality and they have no choice but to call Alfred to pick them and retreat to form a plan of action. As they reach a bar to make a phone call, Batman and Robin dispose of a couple of underworlders, but Batman watches the news on the TV and he learns that half of the people of Gotham still support Blackfire's actions. When Alfred finally gets to the place, Batman and Robin get into the car, but much to Alfred and Robin's surprise, Batman just wants to stay as far away from Gotham as possible as he admits the city belongs to Deacon Blackfire and there is nothing they can do about it.

Retrieved from "https://dc.fandom.com/wiki/Batman:_The_Cult_Vol_1_3?oldid=2790000"
Community content is available under CC-BY-SA unless otherwise noted.