"Book Four: Combat": The corpses of Thomas and Martha Wayne have risen from their graves and they haunt their son, Batman after he forsook Gotham City at its time of need. Bruce then wakes up from his nightm

Part of the "Batman: The Cult" storyline.

I'm returning to Gotham tonight. It's time I reclaimed our city.

The corpses of Thomas and Martha Wayne have risen from their graves and they haunt their son, Batman after he forsook Gotham City at its time of need. Bruce then wakes up from his nightmare and finds himself in the safety of his room at Wayne Manor. A week has passed since his escape from the grasp of Deacon Blackfire and his army of followers, and he has finally decided it's time to regain the control of Gotham from the madman, a decision approved by his old friend, Alfred. Bruce had made up his mind a few days prior, but he has only been waiting for certain equipment to get to his place in order to set his plan in motion. Despite his resolve, Bruce knows this is not a simple task, as Deacon Blackfire has achieved what many have tried for almost a decade: defeating the Batman. The loss has caused Bruce to give in to fear and self-doubt, but he is determined to overcome the odds and come up victorious.

The situation in Gotham City has only gotten worse since the Governor suggested the citizens to evacuate the city after he declared it a disaster area. Only half of the population of Gotham left the city, while the other half remained inside as they believed Blackfire's actions were justified. Their trust proved to be utterly wrong in the end as Blackfire soon took over the city and turned all citizens into slaves, forcing them to make an armed fortress out of Gotham City. The U.S. Army has made an attempt to enter the city, which has been sealed off by Blackfire's men, but their plan went wrong as all the enforcers were killed by the heavily armed members of Blackfire's cult. Several citizens have also tried to escape from the city only to be mercilessly executed by Blackfire's people, who don't care about the dozens of men, women, and children that have died. As a display of their power, the cult has hanged several corpses across the streetlights of the city. A member of Blackfire's cult has managed to escape Gotham after he defected from the group and he tells the media about Blackfire's megalomaniac tendencies as well as his apparent drive to end up dead fighting for his holy crusade. Unknown to the public, Deacon Blackfire indeed wants martyrdom as he believes it is the only way of perpetuating his message for eternity. Those closer to Blackfire see an opportunity to take Blackfire's place as rulers of Gotham once the man is gone.

As all these events take place, the equipment Bruce has been waiting for finally arrives. Bruce and Jason then spend their time training with their new weapons: heavy guns which fire tranquilizer darts. Afterwards, the two of them make sure that their secret weapon is in working order and once this is verified, they go on their way to the city, making a last stop along the way. Commissioner Gordon is still recovering from a serious injury caused by the cult and he is under heavy guard at the hospital. Batman sneaks into his room and informs his old friend that he is on his way to recover their city after he apologizes for his absence. 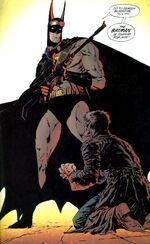 In the middle of the night, Batman and Robin confront Blackfire's followers guarding the Abraham Lincoln Bridge by ramming the barricade they have placed using their new Monster Truck Batmobile. Heavily armored and equipped with endless ammunition, the Monster Batmobile breaks all the barriers along its way. Robin fires tranquilizer darts to those shooting at them from the streets and once there is only one man standing, Batman descends from his monster vehicle and tells the man to pass on a last warning to Deacon Blackfire.

Batman keeps driving the car deeper into the city and they encounter more of Blackfire's followers, who prove to be relentless enemies as they keep up the massacre of innocents, even in the face of adversity and ultimate defeat. Upon learning of Batman's daring move, Blackfire rejoices in the fact that the time of his reckoning has finally come and he prepares to meet his glorious destiny. Meanwhile, Batman and Robin keep driving towards Gotham Square, the closest connection to Blackfire's headquarters in the sewers. Upon reaching their destination, Batman and Robin are horrified to witness the grim scenes of death and torture all over the city. Surprisingly, they find Gotham Square empty, but Batman knows it's a trap and they prepare their last stand.

True to Batman's deduction, dozens of Blackfire's followers appear from the shadows and surround the vehicle, crawling and destroying the vehicle's armor. Once they breach into the monster truck, the thugs are shocked to find it empty and before they could react, knockout gas comes from the vehicle, taking out the thugs inside and outside of the car. Batman and Robin had already moved out of the car through a hatch on the floor, which allowed them to sneak into the sewers unnoticed. Down in the sewers, Batman and Robin have to overcome many more of Blackfire's followers and armed with their tranquilizer guns, night vision gear, gas pellets, explosives, and gas masks, the heroes manage to defeat them all, but Robin is injured in the leg. Once Batman has taken down the man responsible, he provides Robin some bandages to keep him from bleeding while he continues deeper into the sewers and confronts the ultimate evil. 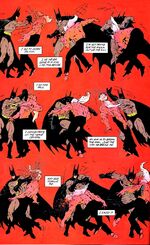 Walking towards Blackfire's inner sanctum, Batman comes across several hanged men, all of whom were previously close followers of Blackfire. Finally, Batman arrives at Blackfire's arena, where the madman is waiting for him inside as several of his followers surround the arena on high seats. Blackfire challenges Batman to kill him with the gun he had picked from one of his followers, but Batman refuses to use it against Blackfire, and instead throws the weapon aside, denying Blackfire of his much-desired martyrdom. Enraged, Blackfire attacks Batman with a knife, but his fighting skills are no match for that of Batman, who easily overcomes and disarms him. Blackfire urges Batman to use the knife to kill him, but Batman drops the knife and instead, beats Blackfire to a pulp. Batman's combat training allows him to inflict the most painful damage possible without knocking Blackfire unconscious. When Blackfire can no longer stand and has been reduced to a bloody pulp, he begs for Batman's mercy, showing a clear sign of weakness in front of all his followers. His second in command notices the danger and he attempts to shoot at Batman, but he is stopped by a well-aimed tranquilizer dart by Robin, who has made it to the arena with his injured leg. Thanks to the few seconds he had to recover, Blackfire then commands his followers to eliminate the Batman, but once they drop into the arena, they turn against him with a thirst for blood. Batman and Robin are unable to save Blackfire from the wrath of the same monsters he created as they are outnumbered. Just like this, Batman and Robin leave the sewers while the murdering maniacs obliterate Deacon Blackfire.

Not long after these events, order is restored to Gotham as the authorities are finally able to get into the city. Most of Gotham's survivors are taken to medical centers while those who were part of Blackfire's cult are arrested and pending trial. Many of those who abandoned Gotham return once everything is in order and the countless vagrants who arrived in the city to join Blackfire start to abandon the place or return to the streets. A new acting mayor is assigned and Batman decides to end the whole affair with one last unfinished business. Going down to the sewers, Batman finds the totem of Deacon Blackfire and burns the piece of wood to ashes.

Retrieved from "https://dc.fandom.com/wiki/Batman:_The_Cult_Vol_1_4?oldid=2790001"
Community content is available under CC-BY-SA unless otherwise noted.