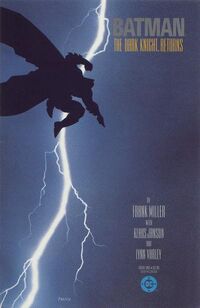 "Batman: The Dark Knight Returns" was a four-issue limited series published in 1986, in the prestige format. It was written and drawn by Frank Miller, embellished by Klaus Janson and colored by Lynn Varley. It won many awards, and is still considered to be one of the greatest graphic novels of all time, second only to Watchmen. It also marks Miller's first work for Batman, a character he would frequently and popularly return to, developing sort of his own universe of continuity in which to tell his stories, complete with his own specific version of the character. "The Dark Knight Returns" is not considered a part of mainstream continuity, and was retroactively labeled an Elseworlds story.

Retrieved from "https://dc.fandom.com/wiki/Batman:_The_Dark_Knight_Returns_Vol_1?oldid=2222881"
Community content is available under CC-BY-SA unless otherwise noted.