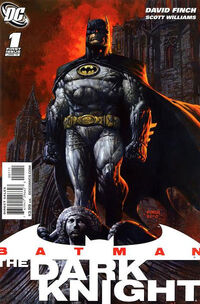 Batman: The Dark Knight is a comic book series starring Batman. The series is spun out of the events of the return of Bruce Wayne and The Road Home. Bruce Wayne resumes his duty as Batman and founds Batman Incorporated.

During the series' publication, the Batman comic books were divided between Bruce Wayne and Dick Grayson. Both characters were operating under the costumed identity of the Batman. Batman: The Dark Knight focuses on Bruce who, despite busy with Batman Incorporated, still cannot completely separate himself from Gotham City as he still has ties, grudges and relationships there.[1] The series is described as having a noir feel with a gothic and supernatural feel. The Demon co-stars in the this series.[2]

The first issue was the best selling comic for the month of December 2010. However, production delays plagued the series resulting in only five issues being produced.[3]. The series is ended and relaunched with a second volume as part of DC Comics' company wide relaunch on September 2011.

Retrieved from "https://dc.fandom.com/wiki/Batman:_The_Dark_Knight_Vol_1?oldid=2249902"
Community content is available under CC-BY-SA unless otherwise noted.