"The Killing Joke": A concerned Batman visits Arkham Asylum and goes to Joker's cell. The Joker is sitting alone in his cell, playing with a deck of cards as Batman sits at the opposite end of the table. The Dark Knight tells Joker that t

I'm not exactly sure what it was. Sometimes I remember it one way, sometimes another... If I'm going to have a past, I prefer it to be multiple choice! Ha Ha Ha!


Appearing in "The Killing Joke"

Synopsis for "The Killing Joke"

A concerned Batman visits Arkham Asylum and goes to Joker's cell. The Joker is sitting alone in his cell, playing with a deck of cards as Batman sits at the opposite end of the table. The Dark Knight tells Joker that the constant madness of their lives must end, or otherwise one of them will surely die at the hands of the other. Joker doesn't move and keeps playing with the cards, and Batman grabs the clown's arm, infuriated. Batman notices that he has white stains on his hands and grabs the man in front of him, who is just a man dressed and wearing make-up to look like the Joker. Batman questions the man about the location of the Joker, who has escaped Arkham and is on the loose.

Joker is looking to buy an abandoned amusement park and after he checks the whole place, he kills the owner and claims the park as his own. However, Joker is lost in thoughts and he starts remembering memories from a past life.

The man who would become the Joker is an unnamed lab assistant who quits his job at a chemical company to become a stand-up comedian, only to fail miserably. Desperate to support his pregnant wife, he agrees to guide two criminals into the plant for a robbery. During the planning, the police come and inform him that his wife has died in a household accident involving an electric baby bottle heater. Grief-stricken, the comedian tries to withdraw from the plan, but the criminals strong-arm him into keeping his commitment to them.

At the plant, the criminals make him don a special mask to become the infamous Red Hood. Unbeknownst to the man, this disguise is simply the criminals' scheme to implicate any accomplice as the mastermind to divert attention from themselves.

Joker is Born
Once inside, they almost immediately blunder into security personnel, and a violent shootout and chase ensues. The criminals are gunned down, and the comedian finds himself confronted by Batman, who is investigating the disturbance.

Panicked, the man deliberately jumps into the chemical plant's toxic waste catch-basin vat to escape Batman, and is swept through a pipe leading to the outside. Once outside, he discovers to his horror that the chemicals have permanently bleached his skin chalk white, stained his lips ruby red, and dyed his hair bright green. This turn of events, compounding the man's misfortunes of that one day, drives him completely insane and results in the birth of the Joker.

The Shooting of Barbara

Joker makes his move and he knocks on the door of Commissioner Gordon. Barbara opens the door and is shocked at the sight of the Joker, dressed in a tourist outfit and pointing a gun at her. Joker shoots Barbara in the spine and his henchmen enter the house and knock Commissioner Gordon out, while Joker starts undressing the wounded Barbara and takes out a camera.

Barbara is taken to a hospital and the doctors tell Harvey Bullock that the damage caused by the bullet would make her unable to use her legs ever again. Batman visits Barbara and when she recovers, she begs Batman to save her father from whatever the Joker has planned.

Joker takes Gordon and imprisons him in a run-down amusement park. His deformed henchmen then strip Gordon naked and cage him in the park's freak show. He chains Gordon to one of the park's rides and cruelly forces him to view giant pictures of his wounded daughter in various states of undress. Once Gordon completes the maddening gauntlet, the Joker ridicules him as an example of "the average man," a naive weakling doomed to insanity. 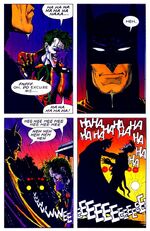 Batman searches all over the city for Joker with no good results. Suddenly, the Bat-Signal beacons in the night and Harvey Bullock gives Batman two tickets to the abandoned amusement park. As Batman arrives to save Gordon, the Joker retreats into the funhouse. Gordon's sanity is intact despite the ordeal, and he insists that Batman capture the Joker "by the book" in order to "show him that our way works". Batman enters the funhouse and faces the Joker's traps, while the Joker tries to persuade his old foe that the world is inherently insane and thus not worth fighting for. Eventually, Batman tracks down the Joker and subdues him.

Batman then attempts to reach out to him to give up crime and put a stop to their years-long war. The Joker declines, however, ruefully saying "It's too late for that... far too late". He then tells Batman a joke, which reflects their current situation and is funny enough to make the normally stone-faced Batman laugh. While they are laughing, Batman reaches across to Joker. They stop laughing abruptly while the sirens of the police cars keep getting louder as they approach the two men. In the end, all noise ceases and only the rain keeps pouring down.

Retrieved from "https://dc.fandom.com/wiki/Batman:_The_Killing_Joke?oldid=2794131"
Community content is available under CC-BY-SA unless otherwise noted.