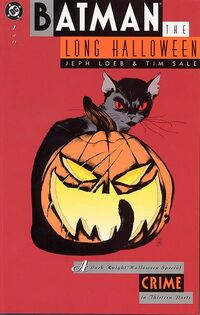 Batman: The Long Halloween was a thirteen-issue limited series published from December of 1996 until December of 1997. The series takes place during the Year One era of the Batman mythos and is followed by its companion series, Batman: Dark Victory. Issue #1 and #13 which serve as bookends are published in Prestige Format edition. Both limited series have been released in hardcover trade paperbacks.

The 2008 feature film The Dark Knight borrowed many elements from this series such as the decline of the Gotham mob and the rise of "freak"-ish supervillains like Joker, Two-Face, and the Scarecrow.

Back to Comics Contents : Comics B : Batman: The Long Halloween Vol 1

Retrieved from "https://dc.fandom.com/wiki/Batman:_The_Long_Halloween_Vol_1?oldid=1895951"
Community content is available under CC-BY-SA unless otherwise noted.