The Mud Pack is a four part Batman storyline written by Alan Grant and illustrated by Norm Breyfogle. Published in 1989 on Detective Comics (Volume 1), the story focused on the members of Batman's Rogues Gallery who adopted the "Clayface" mo

The Mud Pack is a four part Batman storyline written by Alan Grant and illustrated by Norm Breyfogle. Published in 1989 on Detective Comics (Volume 1), the story focused on the members of Batman's Rogues Gallery who adopted the "Clayface" moniker over the years, while also introducing the most notable version of Clayface as "The Ultimate Clayface".

Sondra Fuller, the fourth villain to adopt the Clayface identity sought the first man to ever use that name and she found the retired actor, Basil Karlo recovering at the prison's hospital due to health complications. It is then that the two of them formed an alliance to eliminate the Batman and Karlo came up with a perfect plan.

Finally released from prison after years, Karlo and Fuller set their plan in motion. Fuller, also known as "Clayface Four" or "Lady Clay", adopted the physical appearance of Looker in order to use her kinetic powers and manipulate others, specifically Clayface III, who was locked away in Arkham Asylum and was essential in their plan. Meanwhile, Karlo located the last remains of what had once being Matt Hagen and he took the pile of dirt with him to complete the first phase of his plan, which consisted in gathering all the enemied of Batman called "Clayface" and form a strong alliance to kill Batman and take over Gotham.

Batman was alerted of Clayface III's breakout from Arkham Asylum and while investigating, he learned that somehow, Looker was involved. After talking with his former ally, Batman learned that Lady Clay could be involved and he started to get a clear picture of the situation when he also learned that Karlo was recently released from prison. Karlo gathered all the Clayfaces and together they formed the Mud Pack, although they were unable to bring Hagen back to life, as he was killed during the Crisis on Infinite Earths. With their combined forces, Karlo acted as the leader and Lady Clay manipulated Clayface III using Looker's abilities in order to do their bidding. Karlo sent Lady Clay and Clayface III on a criminal rampage and Lady Clay would impersonate Batman to soil the Dark Knight's reputation.

Batman was able to locate both Clayface III and Lady Clay during one of their crimes, but he couldn't stop them and instead was captured, according to Karlo's master plan. Batman is taken to the Mud Pack's hideout where he is mentally tortured thanks to Lady CLay using the abilities of Looker. At this point, the real Looker had perceived that someone was using her powers for evil and making the connection to the case Batman was working on, she travelled to Gotham City in order to assist the Dark Knight.

Karlo wanted to celebrate their apparent victory over the Caped Crusader and he gave some champagne to Lady Clay, who drank the glass, unaware that Karlo had dosed the drink with a strong sedative. Karlo then took a sample of her blood and one from Clayface III, before leaving them behind in order to achieve his ultimate goal of becoming a true Clayface himself. When Lady Clay and Clayface III recovered, they were at odds, but learning that both of them were manipulated by Karlo, they found common ground and even developed romantic feelings for each other. Ultimately, both of them decided to leave all the complications behind and start a new life, together and far away from Gotham. 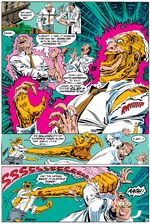 Eventually, Looker found a mentally defeated Batman and helped him recover control of his mind with her own powers. Once they had recovered, they investigated the Mud Pack's hideout and learned the truth behind Karlo's intentions. Batman and Looker started a manhunt for Karlo, but the criminal had already broken into the blood laboratory of the Gotham General Hospital in order to start the procedure to inject himself with the Clayfaces' blood. Karlo's plan was successful and he transformed into the Ultimate Clayface, just as he was found by Batman and Looker. Both heroes tried to fight and defeat the new clay monster, but Clayface was now stronger than ever before. On the verge of being defeated, Batman told Looker to overload Clayface's powers and his corrosive touch became too much to handle, allowing Batman to throw Clayface's body to the street, where his body started to eat through the ground, seemingly to the very core of the Earth.

With the threat under control and the Mud Pack disbanded, Batman and Looker returned to their regular lifes while Lady Clay and Clayface III did the same.

Retrieved from "https://dc.fandom.com/wiki/Batman:_The_Mud_Pack?oldid=2304631"
Community content is available under CC-BY-SA unless otherwise noted.