"The All-Over": Bruce Wayne finally reaches Vanishing Point, where the Archivists inform him of his voyage through time. They separate him from the entity known as the Hyper-Adapter and quarantine it, while giving him the absolute kno

Part of the "Return of Bruce Wayne" event.

'What is the first truth of Batman?' I had help. I wasn't alone.

Synopsis for "The All-Over"

Bruce Wayne finally reaches Vanishing Point, where the Archivists inform him of his voyage through time. They separate him from the entity known as the Hyper-Adapter and quarantine it, while giving him the absolute knowledge for a brief moment before the absolute destruction. The archivists know that they must send Bruce back to the 21st century, without any memory of his life; and for that purpose, they use the Time Sphere in which Superman and the Time Masters have arrived at Vanishing Point.

However they are stranded there after Bruce took the Time Sphere from them. As the imminent destruction of time begins, they are surrounded by a sphere that won't let them escape. When they are all about to lose hope, the sphere turns into a Time Sphere, much more powerful that the one they lost. This Time Sphere was Bruce's last contingency plan for the Time Masters to return home before the end of time.

Batman finally arrives at the Justice League Watchtower, but he is no longer human. Instead, the cybernetic Batman is a hybrid of Bruce Wayne and the architects infused with Omega Sanction radiation from the Hyper-Adapter. As a result, the architect's AI allows Wayne to adapt his weapons and suit to each of the Justice League members that try to stop him. With most of the League incapacitated, Red Robin locks himself in with Wayne and tries to reason with him. Wayne subconsciously begins remembering every aspect of his life, including Drake, acknowledging him as Robin. Drake informs him of events that have occurred in his absence.

Wonder Woman confronts him and while he doesn't harm her, he tells her to stay back as he won't let anyone stand in the way of his mission. Bruce asks her to use the Lasso of Truth to make him reveal everything that's going on and so he can regain his memories. He explains that he knew of Darkseid's plan to use the Omega Sanction to send him slowly forward through time, and that his solution was to simply forget his existence so that the Hyper-Adapter couldn't come after him and he had tricked him into coming to the present. However now that he remembers who he is, he asks her for help, but Diana realizes there's something more to his plan.

As he tells everyone this, a voice begins demanding Wayne to cease because he is 'disturbing father'. The voice is the Sanction, father being Darkseid, found within the netherworld of gods, observing the final stages of his plan as a voice repeats to him that something is wrong. The Hyper-Adapter however infests Wayne and overtakes the Archivist symbiote, while easily overwhelming Diana.

When the Time Masters arrive at the Watchtower, the Archivist warns them to stay away as separating him and Bruce will result in the latter's death. Hal, Superman and Diana try to tear the symbiote out but are unsuccessful and Bruce tells them that he has to do it himself. They lock the being inside the time sphere, where Batman expected the creature to be locked and turn it against itself. The plan succeeds, and the Hyper-Adapter is sent back in time transformed as a gigantic bat, instead of a doomsday weapon. After the struggle Bruce starts dying and states that Darkseid was trying to incarnate in Dr. Hurt.

Superman states that the dangerous amounts of Omega radiation within Wayne will only leave when he's dead, but Tim pleads them to not let him die. Diana states that it's a result of him striking down Darkseid and takes him to the Hall of Justice. During this, we see a vision of a bloody and beaten Bruce sitting in a chair in Wayne Manor commenting that if he rings his bell, Alfred will come and patch him up. Darkseid appeals to Wayne one last time to embrace the finality of Anti-Life, to which Bruce rings the bell- creating a metaphorical reverberation of the note that defeated Darkseid during Final Crisis. 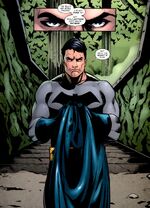 Superman and Diana try to treat him while he has gone into clinical death. Diana states that though the radiation is leaving, they only have a small amount of time to revive him. Tim asks them to tell him that Gotham's in trouble, so he has the strength to pull through and also asks them to give him his cowl when he comes back. They are successful and he is purged of the radiation, commenting that the first truth of Batman was: he was never alone. Soon he dons his cape and cowl once again, commenting that Gotham's disease has spread beyond its borders. And that once again, Batman is needed.

Appearing in "The All-Over"

Retrieved from "https://dc.fandom.com/wiki/Batman:_The_Return_of_Bruce_Wayne_Vol_1_6?oldid=2850950"
Community content is available under CC-BY-SA unless otherwise noted.