After gaining control of the entire criminal underworld, Black Mask becomes the undisputed crime lord of Gotham City. However, there is a new criminal mastermind that goes by the name of Red Hood and starts taking control of the drug dealin

The Red Hood, The Black Mask,
The Society

Judd Winick wrote Under the Hood based on the events of the iconic storyline Batman: A Death in the Family, by Jim Starlin and Jim Aparo, where Jason was murdered by Joker in a brutal fashion. Winick also used Joker's well known alias, the Red Hood, as written in some of Joker's origins stories, to give Jason a new identity as a way to connect his past death with his future motif.

After gaining control of the entire criminal underworld, Black Mask becomes the undisputed crime lord of Gotham City. However, there is a new criminal mastermind that goes by the name of Red Hood and starts taking control of the drug dealing business in Gotham. Meanwhile, Bruce Wayne learns that Wayne Industries' Research and Development Division has been target of a hostile takeover by a foreigner company and he has been removed from the board of directors. Batman realizes that this could mean that the technology and weapons he has developed might fall in the wrong hands. Meanwhile, Black Mask starts recruiting personnel to secure the leadership of the Organized Crime in Gotham and the first person to join his ranks is Mister Freeze.[1]

Black Mask is able to build Mr. Freeze a new cryo-suit with extremely modern technology and he is keeping an eye on the activities of Red Hood. Batman and Nightwing strike against an illegal shipment when suddenly the boat is bombed and they spot Red Hood on a nearby building. The duo chase Red Hood across the docks until the criminals gets inside a dark warehouse. Batman and Nightwing follow him but they are surprised when they find themselves in the warehouse facing the powerful android, Amazo.[2]

Batman and Nightwing fight Amazo and manage to destroy him, much to Black Mask's dismay. Amazo and the shipment that was bombed belonged to Black Mask and after telling Mr. Freeze to recover whatever was left of the shipment, Black Mask was called by Red Hood, who tells him that he has taken the Kryptonite from the shipment.[3] After a failed bargain, Black Mask sends Mr. Freeze to eliminate Red Hood while Batman and Nightwing follow the trail of radioactivity left by the Kryptonite. All of them collide on the wherehouse, where Red Hood was holding the kryptonite, but Freeze and Red Hood escape, leaving Batman and Nightwing with the kryptonite. Some time later, Red Hood finds the Joker and beats him with a crowbar, revealing that Red Hood is in fact, Jason Todd.[4]

Red Hood starts destroying Black Mask's operations and the crime lord waits for Batman to stop the Red Hood. Meanwhile, Batman investigates everything concerning the resuscitation of dead people and how to bring back the dead. Onyx starts getting information about the drug dealing racket in Gotham, when she is discovered by Red Hood, spying on a gangster meeting.[5] Red Hood and Onyx team up to take down the gangsters and in the meantime, Batman visits Metropolis to ask Superman about his coming back to life from death. Batman doesn't learn anything that he didn't know already and Onyx breaks the alliance with Red Hood when he murders all the gangsters. However, Red Hood stabs her and get the upper hand before the fight even begins.[6] Red Hood tries to get Onyx to attack him, but Batman arrives at the scene and confronts him. Red Hood and Batman battle in the streets of Gotham and Red Hood is able to unmask Batman. To keep it even he removes his helmet and reveals his true identity: Jason Todd. After the encounter, Batman returns to the Batcave and verifies that Jason Todd is in fact alive and despite the recent events, he wants to keep Jason's Robin suit on the display case on the batcave.[7]

After the revelation, Bruce took it upon himself to examine Jason's gravesite and the coffin he was buried, in order to learn what happened to Jason after his death. However, after long days of examining the evidence, Bruce came to the conclusion that there was never a body inside that coffin.[8]

After a few days, Red Hood started attacking Black Mask's rackets with a much more aggressive approach. Soon, Red Hood located Black Mask's hideout and destroyed the top floor with a rocket launcher. After this, Black Mask teamed up with Deathstroke and The Society,[9] who sent Captain Nazi, Hyena, and Count Vertigo to aid Black Mask against Red Hood. They managed to ambush Red Hood, but they were defeated when Batman arrived and the duo eliminated them with ease. Despite their team work, Batman was determined to end Red Hood's crime spree.[10] 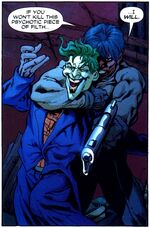 Shortly after, Alfred received a package with a lock of green hair and a note from Jason. Alfred informed Bruce about it and gave him an address written on the package. At that moment, Black Mask called a meeting of all his top associates and murdered them under the eye of Red Hood. Black Mask did this in order to get Red Hood under his control, but after learning of his betrayal they start fighting each other. Batman arrived just in time to see Black Mask stabbing and killing Jason.[11] Black Mask removed Red Hood's helm and Batman recoiled at the sight of a different person than Jason Todd. Black Mask learned from Batman that the man he just killed is not Red Hood and after a discussion that ended up with Black Mask trapped by several explosives, Batman went to the last place where Jason summoned him; Crime Alley. Meanwhile, Jason has captured Joker and kept beating him. Batman located Jason and before the final confrontation started, a bomb was dropped in Bludhaven, obliterating the city.[12] After a brief fight, Jason revealed the place where he kept Joker hostage. Jason tossed a gun to Batman and took one for himself. Using Joker as a human shield, Jason pointed his gun at Joker's head and told Batman that he must either kill Jason, or let Jason kill Joker. At the last half-second, Batman threw a Batarang at Jason's shoulder, which allowed Joker to trigger the explosives wired throughout the building, destroying the entire place.[13]

It is later revealed how Jason came back to life. After the events of Infinite Crisis, Jason was returned to life months after his death. After crawling out of his coffin he was taken and hopitalized for treatment. Jason eventually escaped and was found by Talia al Ghul, who took him to Ra's al Ghul's fortress, where she spent years trying to return Jason to his normal state. After so many failures, Talia used the Lazarus Pit to make Jason fully recover and then she sent him away to find about his past and the present. Jason learned that Joker wasn't dead and that Batman would allow him to live. The news infuriated him and he decided to take action against them under the new identity: The Red Hood.[14]

Retrieved from "https://dc.fandom.com/wiki/Batman:_Under_the_Hood?oldid=2856112"
Community content is available under CC-BY-SA unless otherwise noted.