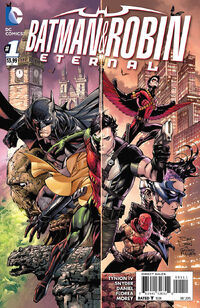 Batman & Robin Eternal (Volume 1) is a weekly comic book series that serves as a follow up to Batman Eternal. The series focuses on all the people who have, at one time or another, assumed the costumed identity of Robin. The story is set some time after the apparent death of Batman and the Robins deal with an enemy from the past. The narration is split between the present and the past, in particular Dick Grayson's first year as Robin. In a way, the series celebrates the 75th anniversary of the Robin character.

Retrieved from "https://dc.fandom.com/wiki/Batman_%26_Robin_Eternal_Vol_1?oldid=2840217"
Community content is available under CC-BY-SA unless otherwise noted.