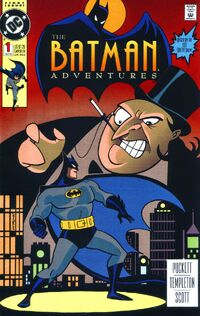 Batman Adventures was an ongoing comic book series featuring the character Batman. It was published from October of 1992 to October of 1995 and took place within the continuity of Batman: The Animated Series. The animated series was inspired by the revisionist works of Tim Burton who directed the 1989 Batman movie and its 1992 sequel, Batman Returns. A second comic book volume was published in 2003.

Retrieved from "https://dc.fandom.com/wiki/Batman_Adventures_Vol_1?oldid=2796892"
Community content is available under CC-BY-SA unless otherwise noted.