"Faces": Two years ago, Batman learned about the murder of Officer Anthony Wells of the GCPD and during his investigation, he deduced that the criminal responsible was part of Two-Face's gang. Shortly afterwards, Batman prepared a trap

Waiting in the Wings

The man wears tights. How rational could he have been to begin with?

Two years ago, Batman learned about the murder of Officer Anthony Wells of the GCPD and during his investigation, he deduced that the criminal responsible was part of Two-Face's gang. Shortly afterwards, Batman prepared a trap to capture the killer with help from Robin, who at the time was Jason Todd. Although their plan was well executed, Robin was discovered by Two-Face, who tried to stop the Boy Wonder and would've succeeded if Batgirl had not shown up in the right moment to assist Robin and help Batman apprehend Two-Face and the police killer. 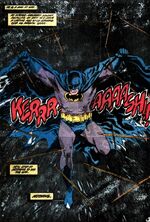 In the present, Bruce Wayne learns that the criminal who killed the cop is to be executed in the electric chair within 72 hours. However, Bruce sees a television broadcast where it is revealed that members of Two-Face's gang have been hiding up in the corrupt nation of Santa Prisca and have arrogantly taken credit for the crime. Coming to the grim realization that Batman captured the wrong person and doomed the man's fortune, he goes into action to revert his mistake.

At first, Batman requests assistance from his friend Commissioner Gordon to have Two-Face released from Arkham Asylum in order to locate his gang's hideout without any trouble. However, a disgruntled Gordon refuses to help Batman, considering such approach is not right. Over the last two years, Gordon grew bitter after the death of his former wife and the paralyzing of his adopted daughter at the hands of the Joker. Nevertheless, Batman decides to take the matter into his own hands and breaks into Arkham to release Two-Face from his cell and takes him to the Batcave, where he is locked while Bruce Wayne attends a social event in Wayne Manor and Alfred works the perfect alibi for Bruce's sudden disappearance.

Once all the tracks have been covered, Batman and Two-Face are taken to Santa Prisca in a private jet from which they jump to the island's shore and swim to land. In the island, Batman disguises himself as Two-Face's bodyguard to avoid suspicion. The plan almost works as Two-Face leads Batman to his secret hideout, but once there, Two-Face's gang turn against Batman and overpower him. Batman is placed in a deathtrap inside an out of control truck with killer dogs, but he manages to get out safely. In the meantime, Batman got the chance to deduce the truth of the situation and he realized that officer Wells, who was apparently killed two years ago had, in fact, made a deal with Two-Face to fake his death and relocate to Santa Prisca, where he could live among criminals.

Batman finally goes to the place where Two-Face and Wells are holed up and he confronts them, but in the struggle, he has to make a final decision to take only one of the criminals. Batman finally decides to capture Wells, allowing Two-Face to escape. Batman takes the crooked officer back to Gotham City in time to stop the execution of an innocent man, but despite his success, Commissioner Gordon reproaches the course of action taken by the Dark Knight, because Two-Face is sill on the loose. Without any other word between them, the two friends depart and go their own separate ways.

Synopsis for "Waiting in the Wings"

Certain night, when Bruce Wayne returns to Wayne Manor after a long journey, Alfred informs him that he wants to resume his acting career, choosing to end his work as the butler for the Wayne Family.

This was not an easy decision by Alfred. Ever since a kid, he was raised under the instruction of his father, the previous butler for the Waynes, as was his father before him. Alfred was supposed to carry the family's tradition, but his mother, who was a former stage actress, wanted a diffent destiny for her son. For the best part of Alfred's early life, he pursued his acting career until the sudden death of his father, whose last wish was for Alfred to carry on the tradition. Like this, Alfred started working for the Waynes as their butler until their unexpected deaths, which left the young Bruce alone in the world. With help from Leslie Thompkins, Alfred raised the young Bruce until his teenage years, when he moved to Europe to continue his studies.

Alfred remained as the guardian of Wayne Manor until Bruce's eventual return as an adult. However, Alfred noticed a drastical change in Bruce and he was the first one to learn of Bruce's secret desire to start a lifelong manhunt against criminals. Alfred scorned the decision, but he supported Bruce in all ways he could. Soon, Alfred started to realize that his job now was not that of a mere butler.

During his last night workig in Wayne Manor, Alfred received some guests on Bruce's behalf, but when the host didn't show up, Alfred turned on the TV to set a distraction. Much to his dismay, Batman was on the news, fighting criminals on an old abandoned theater. While the event was a perfect distraction for the guests, Alfred could barely remain calm as he noticed that the theater was the last place the Waynes ever went to. Alfred also had to keep his stoic performance when Batman was stabbed by one of the thugs and even though his desperation was growing, he kept calm when Batman's voice was heard on the TV. Some of the guests noticed that the voice was similar to that of Bruce, but Alfred suggested otherwise, surprisingly calm for a man on the verge of a nervous breakdown.

Moments later, Bruce called home and apologized to his guests, who left the place immediately. Batman arrived shortly afterwards and Alfred helped the man he cared for as his very own son. Thanks to his military medical training, Alfred tended Bruce's wounds and the next morning, Alfred was still in Wayne Manor, much to Bruce's surprise. After making a call to postpone a date impersonating Bruce, Alfred explains that his role as part of Bruce's life has grown so large that it could fulfill him as an actor as he has to keep people convinced that Bruce is less of what he really is. But most importantly, Alfred keeps the last thought to himself, because he also has to act everytime Bruce goes out at night, pretending it doesn't bother him. And he has to pretend that his heart doesn't cry with every wound he has to heal. And that is the best a man can do... waiting in the wings.

Appearing in "Waiting in the Wings"

Synopsis for "Who's Who Entries"

A list of updated Who's Who profiles on the Batman Family.

Appearing in "Who's Who Entries"

Retrieved from "https://dc.fandom.com/wiki/Batman_Annual_Vol_1_13?oldid=2835369"
Community content is available under CC-BY-SA unless otherwise noted.