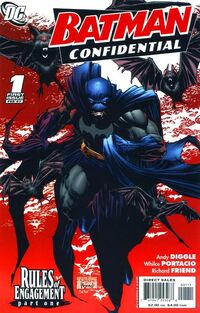 Batman Confidential, like Batman: Legends of the Dark Knight (Volume 1), features stories by rotating creative teams and were also set in the early years of Batman's career. Rather than feature early crime-fighting Batman tales, Batman Confidential featured stories that illustrate key moments in the character's past such as first meetings, critical decisions, alliances, confrontations and events that would shape him as the character he is today. The stories told may or may not be actual canon, as aspects (such as The Joker's origin story) differ greatly from previous versions. All issues are self-contained story arcs, told by rotating creative teams; the idea being to give top creators the chance to tell complete stories without the hassles of mainstream continuity. The first issue launched on December 6, 2006.

Retrieved from "https://dc.fandom.com/wiki/Batman_Confidential_Vol_1?oldid=2764184"
Community content is available under CC-BY-SA unless otherwise noted.