This page contains information about Batman Family (Volume 1) . Batman Family was an anthology series published from October, 1975 to November, 1978 on a bi-monthly schedule. It was the first series dedicated to showcase solo stories of the various members of the 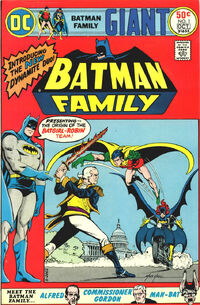 Batman Family was an anthology series published from October, 1975 to November, 1978 on a bi-monthly schedule. It was the first series dedicated to showcase solo stories of the various members of the Batman universe including Robin, Batgirl, Alfred Pennyworth, Man-Bat and a few others. The series was created as a result of the high demand for the back-up features present in Batman and Detective Comics, where the characters aforementioned were featured. Initially under the editorial office of Julius Schwartz, the series ran one or two original stories and a number of reprints, but the format changed in issue #11, as part of DC's new editorial coordination efforts. The series was almost entirely guided by the creative mind of Bob Rozakis, who was both writer and editor for most of the stories featured in the comics.

In issue #17. the series' format was changed and it became an 80-page dollar comic after publisher Jenette Kahn switched various series to that format. With this change, the editorial duties of Batman Family were given to Al Milgrom and Batman stories were included as the main feature. However, after issue #20, Batman Family was suddenly merged with Detective Comics in an effort to boost the latter's sales. Most of the vignettes from Batman Family were moved to Detective, while some were replaced or outright cancelled. The merge was also part of the transition to the new editor of the Batman titles, Paul Levitz.

Back to Comics Contents : Comics B : Batman Family Vol 1

Retrieved from "https://dc.fandom.com/wiki/Batman_Family_Vol_1?oldid=1841081"
Community content is available under CC-BY-SA unless otherwise noted.