"The Man Who Melted Manhattan!": Robin and Batgirl are trapped on the Batcycle and Robin's Motorcycle, respectively and both of them are heading towards New York City. Once they reach their destinations, they are forced t

"The Man Who Melted Manhattan!"

The Man Who Melted Manhattan!

Babs, I guess I do come on strong sometimes-- and I really don't have any right to it! At Hudson U., Robin's a big celebrity-- I can get any girl I want... but you're the girl I can never get! Yeah, I'm a hotshot superhero and I get my name in the papers and people all know me-- but you have all the same things! You aren't awed by my fame! It's like having a crush on your fifth-grade teacher-- everything she says or does you interpret as a sign that she's madly in love with you... but that's not the case at all! It's always a one-sided thing! But I'm a big boy now and I have to say something you might not want to hear! I love you, Babs-- as a friend, as a partner, even as a big sister-- and I'd like to believe I could love you as a...

Appearing in "The Man Who Melted Manhattan!"

Synopsis for "The Man Who Melted Manhattan!"

Robin and Batgirl are trapped on the Batcycle and Robin's Motorcycle, respectively and both of them are heading towards New York City. Once they reach their destinations, they are forced to avoid each other, as the vehicles sought to crash against each other. After avoiding a series of possible crashes, Batgirl and Robin are able to break free from the vehicles using Robin's Utility Belt and just in time to avoid the last crash. After the vehicles are destroyed, Batgirl and Robin are able to catch their breaths and they both realize that they have spotted Alfred Pennyworth during the whole affair. Knowing that there's more to the whole mystery, Robin and Batgirl decide to continue the investigation together. 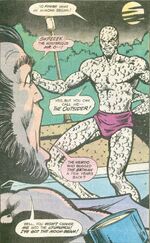 In the meantime, Kirk Langstrom goes out at night as Man-Bat and is confronted once again by the Sunset Gang. This time, Man-Bat successfully defeats them and he is subsequently challenged by their mysterious leader, who is none othen than The Outsider. The terrible villain summons the avatar of Uturuncu, the Were-Jaguar, which was released after Man-Bat's previous encounter with the Sunset Gang. In the ensuing battle for survival, Man-Bat goes to the American Museum of Natural History, where he is apparenly defeated by the were-jaguar.

At that moment, Robin has taken Batgirl to the Titans Headquarters, where they investigate the case further and deduce that the Outsider is behind the recent attacks. After a long day, Batgirl feels tired and wants to get some rest, but Robin takes the chance of them being alone to talk to her about his feelings for her, but as Robin is about to tell her the truth, he realizes that she had fallen asleep. Unfortunately, the peaceful moment is interrupted by the Outsider, who breaks into the Titans Lair through a portal and uses his supernatural abilities to turn the heroes' equipment against them. The Outsider finally reveals his plans to kill every member of the "Batman Family" and he summons the Uturuncu to eliminate the heroes.

The Outsider leaves the Titans Lair and continues his devastation of Manhattan as he uses his powers to melt the city away like candles. However, as he is on the top of his glorious moment, he is interrupted by the arrival of Batgirl, Robin and Man-Bat. The heroes reveal that Man-Bat was the winner in the confrontation between the Uturuncu and that he disguised himself as the were-jaguar to help Batgirl and Robin.

The heroes then use the special flashlight that the Sunset Gang used against Man-Bat on the Outsider, splitting Alfred and the Outsider as two separate beings. Alfred is still in shock, but he confronts the Outsider bravely. The villain on the other hand, had lost his powers as he was separated from Alfred and he is easily defeated by the trusted butler. The Outsider finally trips over a bridge and falls to his death and Alfred passes out.

Afterwards, Alfred was taken to a hotel room by Batgirl and Robin, who informed him that he was in New York and he had no idea of how he ended up there.

Later, Barbara Gordon returns to her apartment in Washington, D.C. and not long after this, someone knocks on her door. When Barbara goes to see who is it, she is shocked to see Batwoman melting away and leaving only her costume behind.

Retrieved from "https://dc.fandom.com/wiki/Batman_Family_Vol_1_13?oldid=2626457"
Community content is available under CC-BY-SA unless otherwise noted.