Start a Wiki
This page contains information about Batman (Volume 1) . Batman began publication in the Spring of 1940 and was published until 2011. Batman was initially released as a quarterly magazine, but changed to a bi-monthly format with issue #6. Beginning
Batman Vol 1 (1940-2011) 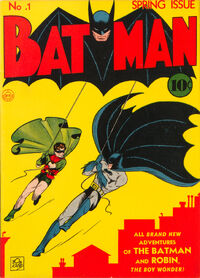 Batman began publication in the Spring of 1940 and was published until 2011. Batman was initially released as a quarterly magazine, but changed to a bi-monthly format with issue #6. Beginning in 1954, National Periodical Publications began publishing eight issues of Batman a year. It wasn't until issue #260 that DC Comics began publishing Batman on a monthly basis, where it has remained ever since.

The first seven Batman Annual editions were actually released on a semi-annual basis, rather than yearly. They were double-sized issues reprinting classic Batman tales. With Annual #8, the series began publishing original stories. With the exception of Action Comics and Batman's own predecessor, Detective Comics, the Batman title remained one of the longest running DC comic book series of all time. 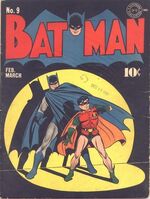 Batman was a relatively new character in the Golden Age of Comics, and the creative teams on the "Batman" series consisted of the same people who had worked on the Batman stories in "Detective Comics". They were Batman's creators Bill Finger and Bob Kane. The two of them, with assistance from artists like Jerry Robinson and George Roussos, collaborated on the initial issues of Batman. The job was relatively easy as the book was initially published on a quarterly schedule. However, "Batman" became a bi-monthly comic book starting with Batman #6 (1941). As the workload increased, new creators were brought along to assist Kane and Finger produce the necessary Batman stories for the book. Most of the new creative talent were brought to assist Kane in the art department. They were Jack and Ray Burnley, Lew Sayre Schwartz, Paul Cooper, Charles Paris, Jim Mooney and most importantly, Dick Sprang, who defined the way Batman looked in the Golden Age. All of them worked as ghost artists for Bob Kane, who was still the only creator credited in the Batman comics. Various writers were also involved in the creation of the comics including Don Cameron, Joseph Greene, Edmond Hamilton, David Vern Reed and a few others. Despite their contributions, Bill Finger remained the main writer of the Batman title.

The "Batman" stories of this era were mostly action-adventure oriented, with Batman and Robin confronting a myriad of criminals. Among the most common villains were gangsters and schemers of all sorts, while the best known foes showed up only on special occasions. During World War II; there were also a couple of war-themed stories. Ocassionally, some stories developed fantasy and science-fiction themes, such as time-travel and encounters with mythical creatures and supernatural settings. As the Golden Age came to an end, the creative efforts shifted, dropping the crime-related stories in favor of science-fiction and fantasy stories. 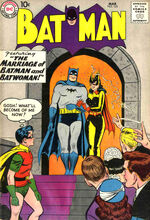 In the early 1950s, the comic book industry underwent drastic changes that culminated in the creation of the Comics Code Authority (CCA), in 1954. During these years, Bill Finger remained as the main writer, while a few others like Edmond Hamilton and Ed Herron filled in for Finger whenever DC required additional stories. The art in Batman was still managed and credited to Bob Kane, while his ghosts artists, like Dick Sprang and Lew Sayre Schwartz, did all the job.

With the introduction of the CCA, Jack Schiff became editor of the Batman comics and shifted the creative efforts on the book to meet the requirements of the Comics Code. For the next decade, the Batman stories became increasingly "silly" and were heavily influenced by science-fiction and fantasy. Most of the usual creators remained on the title, with the exception of Dick Sprang, who moved away from doing Batman. Bob Kane soon found a replacement and Sheldon Moldoff became the main Batman artist for the next decade. Moldoff was often assisted by inkers like Stan Kaye and Charles Paris.

Jack Schiff oversaw the creation of multiple characters like Bat-Mite, Ace the Bat-Hound, Batwoman and Bat-Girl and few notable new enemies like Mister Freeze and Clayface 2. Despite these new creations, the creative shift of the Batman comics to the more "kid-oriented stuff" was harmful and the Batman sales dropped. 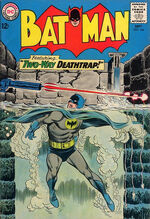 In 1964, DC assigned Julius Schwartz as the new Batman editor and under his management, new writers and artists were brought in to the Batman comics. Initially, the writing duties were shared by Gardner Fox and John Broome, who worked with Bill Finger on new Batman comics, until 1966, when Finger was no longer part of the team. Sheldon Moldoff remained as the main artist in Batman, but he was forced to change his style in order to match that of the main artist in Detective Comics, Carmine Infantino. Joe Giella became the new inker for both series and Gaspar Saladino replaced Ira Schnapp as the letterer on the series.

This new creative team revived some of the old villains like Riddler, Joker, Catwoman and Penguin; an effort that came about around the same time as the Batman TV Show gained popularity. Poison Ivy is the most notable character created in that era, thanks to a rare collaboration by writer Robert Kanigher in Batman #181.

By the end of the 1960s, Bob Kane was no longer under contract and his ghost artist, Sheldon Moldoff was also removed from the book. Gardner Fox and John Broome were replaced and Frank Robbins became the main Batman writer, working with Irv Novick as the main Batman artist. Dick Giordano started workin as the inker and the letters were done by Ben Oda. This creative team tried to revitalize the concept of Batman as a Dark Knight and working with editor Julius Schwartz, they promoted a big change to the status quo. In Batman #217, Robin graduated high school and went to college, leaving Batman as a loner as he had been in the beginning. This also marked the end of the Silver Age of Batman. 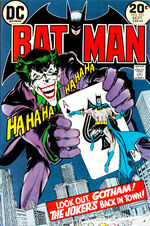 The Bronze Age is often placed between the early 1970s until the mid 1980s and it's the era that consolidated the Batman comic as a monthly series. It started in 1970, when the creative team decided to bring back the figure of Batman as a dark avenger. The leading creative team of this era were writer Dennis O'Neil and artist Neal Adams; who set the new standards for the Batman stories. They would often share the creative duties of the Batman title with writer Frank Robbins and artist Irv Novick. These creative teams oversaw the creation of important new characters like Ra's al Ghul in Batman #232 and the revamp of old classic enemies like The Joker in Batman #251.

By the mid-1970s, most of the creative teams had moved on to other projects, leaving only editor Julius Schwartz as the constant member. He promptly hired writer David Vern Reed and artist Ernie Chan as the new Batman collaborators. Chan lasted for a year and many artists filled in the illustration chores of Batman including Romeo Tanghal, John Calnan, Mike Grell, Sal Amendola and Michael Golden.

Around 1978, writer Len Wein was brought as a replacement for Reed. After 14 as the editor of the Batman comics, Julius Schwartz stepped down and starting in Batman #310, Paul Levitz became the new editor of Batman. 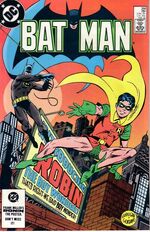 Batman #368 (1984)
Wein continued working until Batman #327, after which writer Marv Wolfman took over the Batman title. Novick remained as the main artist until the early 1980s, when Dick Giordano became the new Batman editor. This change came along with a new creative team. Gerry Conway became the main Batman writer and Gene Colan the new artist. Artist Don Newton joined the team shortly afterwards. Together, Conway, Colan and Newton oversaw the creation of new characters like Jason Todd in Batman #357.

In 1983, Len Wein became the new Batman editor and he hired Doug Moench as the new Batman writer. Moench worked alongside Colan and Newton until the latter passed away and was replaced by Tom Mandrake. There was also a small collaboration between Moench and artist Paul Gulacy. Moench and his team created the iconic Nocturna in Batman #363 as well as Black Mask in Batman #386.

The Bronze Age came to an end with the Crisis on Infinite Earths, which also marked the end of the collaborations between Len Wein, Doug Moench, Gene Colan and Tom Mandrake in Batman #400. 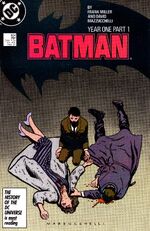 Former Batman writer, Denny O'Neil became the new Batman editor in 1986 and started anew with different creative teams. The first big storyline in the Batman comic was Batman: Year One, written by Frank Miller and illustrated by Dave Mazzucchelli. The story became the new origin story for the character in the Post-Crisis continuity for DC Comics. The story lasted for 4 issues, after which Max Allan Collins became the main Batman writer, working with artists like Dave Cockrum and Chris Warner. Collins wrote the new origin story for Jason Todd, which was published after "Year One", in Batman #408.

Jim Starlin became the new Batman writer working alongside veteran Batman artist, Jim Aparo in 1987. They worked on the title for over a year and created iconic storylines such as Batman: Ten Nights of the Beast and Batman: A Death in the Family, which saw Jason Todd murdered at the hands of the Joker. After Starlin's run, John Byrne collaborated with Aparo in the storyline called Many Deaths of the Batman.

In 1989, Marv Wolfman became the new Batman writer while Aparo remained as the main artist in the series. Among their most notable works are the storylines Batman: Year Three and Batman: A Lonely Place of Dying; which introduced Tim Drake as the new Robin. One year later, Peter Milligan and Kieron Dwyer worked on a short storyline called Batman: Dark Knight, Dark City; after which Alan Grant and Norm Breyfogle became the new creative team on Batman; officially introducing Tim Drake as the new Robin in Batman #457; Harold Allnut in Batman #458 and Ace the Bat-Hound in Batman #464.

Back to Comics Contents : Comics B : Batman Vol 1

Retrieved from "https://dc.fandom.com/wiki/Batman_Vol_1?oldid=2759656"
Community content is available under CC-BY-SA unless otherwise noted.