"The Crimes of the Clockmaster": Batman and Robin are challenged to a duel of wits by the Clockmaster, a new criminal who leaves clues to his crimes by means of a clock which shows a 3-D display of a new targ

"The Crimes of the Clockmaster"

The Crimes of the Clockmaster

The Race of Death


Appearing in "The Crimes of the Clockmaster"

Synopsis for "The Crimes of the Clockmaster"

Batman and Robin are challenged to a duel of wits by the Clockmaster, a new criminal who leaves clues to his crimes by means of a clock which shows a 3-D display of a new target for a heist every 24 hours. During the first two crimes, Batman and Robin manage to locate the crooks at the crime scene, but they have no information about their boss' whereabouts. The final clue is a small oven with a flower inside. Robin believes that the Clockmaster would strike at the Gotham Baking Company and he goes there to stop the crime. Batman on the other hand, heads over to the Gotham Jem's Exhibit, where the Clockmaster actually is. Batman deduced that the clue meant something different - "hot rocks", and he assumed that the Clockmaster was after the jewels all along. In the end the criminal is captured and his clue machine becomes part of the trophy room in the Batcave.


Appearing in "The Race of Death"

Synopsis for "The Race of Death"

With Commissioner Gordon's help, Batman and Robin enter a cross-country race as a guise for their real task - to protect one of the other racers from being murdered. Soon the Dynamic Duo prevent some of the competitors from a certain death in what appear to be coincidental accidents. When Batman and Robin rescue a man from drowning in the river, a second man comes out of the water and Batman notices something odd with his footsteps. After analyzing his shoes, Batman discovers that the man was wearing weights on his shoes, which is a connection to all the attempted murders. Finally, the race continues without Batman, Robin or the killer, who is taken away by the heroes.

Bat-Girl plays a decisive role in the capture of the costumed criminal known as the Moth. But when the Moth breaks jail, Batman, Robin and Batwoman try to curtail Bat-Girl's crime-fighting activities, fearing The Moth will seek vengeance on her. For this purpose, Robin is the person in charge of keeping Bat-Girl distracted while Batman and Batwoman work together to recapture the Moth. 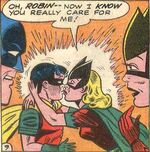 Bat-Girl kisses Robin
Unfortunately, Batman and Batwoman fall for a trap set up by Moth and Batman is barely able to contact Robin via his Utility Belt to inform him of the situation. Robin tries to sneak away from Bat-Girl, but she notices Dick's disappearance and follows him to the location where Moth has Batman and Batwoman tied up. Using a short-cut, Bat-Girl is able to enter the place before Robin can arrive. The Moth instantly tries to get revenge on her, but Robin arrives in time to free Batman and Batwoman. Together, the Bat-Team manage to capture the crooks and their leader. After this, they reveal the truth to Bat-Girl and she is moved by Robin's act of unselfishness towards her. Bat-Girl then gives Robin a big kiss and after watching her niece taking such a direct approach, Batwoman gives Batman a big kiss as well.

Retrieved from "https://dc.fandom.com/wiki/Batman_Vol_1_141?oldid=2267671"
Community content is available under CC-BY-SA unless otherwise noted.