"A Revenge of Rainbows": After their succesful victory over Poison Ivy, Batman and Jason Todd have returned to the Batcave, where they start thinking of names for Jason's new costumed identity. At that moment

"A Revenge of Rainbows"

A Revenge of Rainbows

Thank you, Dick... for all the years... for everything.

Synopsis for "A Revenge of Rainbows"

After their succesful victory over Poison Ivy, Batman and Jason Todd have returned to the Batcave, where they start thinking of names for Jason's new costumed identity. At that moment, they are surprised by Dick Grayson, who has come to the cave to inform them about an important decision. Dick can no longer work under his sidekick identity as leader of the Teen Titans. He has also noticed that Batman and "Robin" were responsible for capturing the Joker and since it wasn't him in the case, he deduced the obvious truth. Finally, Dick has come to decide that it's time to pass on the Robin identity and he gives Jason full permission to use the Robin costume and continue his legacy. While the eager boy goes to change his outfit, Dick and Bruce share a touching moment and they are thankful for each other's presence in their lives. Jason wears the Robin outfit and Dick knows it's time for him to leave. When Bruce asks him what identity he is going to use next, Dick doesn't have an answer for this. 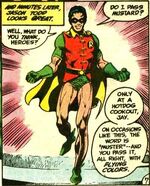 Now that he is officially Robin, Jason is concerned that the public will not recognize his own personal merits and Batman makes him understand that they work for justice and not for public recognition. Batman also knows that Jason is worried because of the years of legacy he has to live up to, but working together, the two of them live up to the standards of the old Dynamic Duo, although with a touch more of unnecessary violence. As their activities become known across the city, Vicki Vale makes sure to give the heroes all the advertisement they could ask for in her newspaper.

Meanwhile in Montreal, Alfred Pennyworth and his daughter Julia learn that her adoptive father was in fact murdered.

Elsewhere in Gotham, Crazy Quilt has hired a scientist to create a new helmet for him, one that would allow him to see again after he was blinded years ago by Robin. The new helmet is successful and equally powerful as the previous one. After killing the scientist, Crazy Quilt learns that Robin is back in action with Batman and he sets his plan to kill Robin, in motion.

Before going out on patrol, Jason is having concerns about people not being able to tell the difference between him and Dick Grayson. Later, Batman and Robin go out on patrol and Batman deduces that Crazy Quilt must be out looking revenge against Robin. Batman leaves Robin behind as he goes to investigate some special lights, but once Robin is alone, he is attacked by Crazy Quilt, who believes the young one is the old Robin. When Batman realizes he has been decoyed, he returns to Jason, only to find him beaten to a pulp and he assumes the kid has been killed.

Appearing in "A Revenge of Rainbows"

Retrieved from "https://dc.fandom.com/wiki/Batman_Vol_1_368?oldid=2152875"
Community content is available under CC-BY-SA unless otherwise noted.