"Darkly Moved the Pawns": The crimes of the Night-Slayer while impersonating Batman continue in Gotham City. One night, Tina, the blind girl who helped Anton Knight, contacts a police officer to inform him about the loot that the "Batm

Anton Knight-- once known as the Thief-of-Night and now as Night-Slayer-- is not the Batman... I AM.


Appearing in "Darkly Moved the Pawns"

Synopsis for "Darkly Moved the Pawns"

The crimes of the Night-Slayer while impersonating Batman continue in Gotham City. One night, Tina, the blind girl who helped Anton Knight, contacts a police officer to inform him about the loot that the "Batman" has been stealing. Unfortunately, Knight gets there as well and deals with the police officer, leaving the bild girl alone in her eternal darkness.

Meanwhile, Nocturna and Robin have searched Gotham looking to find the real Batman or the imposter, but they have had no luck. Upon returning to Nocturna's apartment, Robin once again shows his distrust and contempt for she who has only wanted to be a good mother and earn his trust. When she goes into her room, Robin starts searching the place until he finds the stolen loot by her previous accomplices and the kid threatens the lady to call the police on her and turn her to the authorities. Tired of fighting, Nocturna tells the kid to do as he will, but Robin decides to keep the loot for later, until the case of the fake Batman is solved.

As Nocturna prepares to sleep for the night, the real Batman, still wearing the outfit of the Night-Slayer, shows up in her room and asks her help. As they move out of the building, they are spotted by Amanda Groscz from the Child Welfare Bureau, who realizes she has made a mistake by giving Jason to Nocturna. Together, Bruce and Nocturna follow Anton Knight to a fur warehouse, where the next crime will take place. Instead of confronting the crook at that moment, Bruce comes up with a plan that will eliminate all their enemies with one master strike.

At the Mayor's mansion, Hamilton Hill grows ever paranoid about the recent crimes of the Batman, which have caused distrust on the citizens about his version of Batman's attack on him. Hill assumes that Batman is in fact committing those crimes in order to affect his own political image. At that moment, Hill gets an anonymous call from a woman, who tells him about the next crime of the Batman. Preparing his team, Mayor Hill gathers the police and the press for this event which will gain him the trust of everyone in the city. As this happens, Bruce thanks Nocturna for her assistance in making that call and he tells her to go back home to her son as he goes back to Wayne Manor in order to change to the proper outfit.

Moments later, the news about the massive police and media gathering reach the Gotham General Hospital, where Harvey Bullock is still recovering. James Gordon is told about the situation going down and Bullock tells his friend to go there as well and to not worry about him since the danger is most likely gone. Gordon agrees and meets the rest of the police who have alread gathered around the fur warehouse and are just waiting for "Batman" to strike. 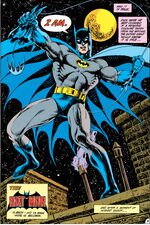 The fake Batman goes into action and is utterly shocked by the presence of the media and the police on the crime scene, much to Mayor Hill's satisfaction. However, Anton Knight is unmasked in front of everyone by the real Batman, who then proceeds to give evidence of his own innocence thanks to the testimony of Herman Blevins, the man Hill hired to create false evidence against Batman. In a desperate attemtp to escape, Knight grabs Mayor Hill and slowly walks towards the docks near the river. Batman's timely response saves Hill, but he and the villain fall to the river, where the Night-Slayer manages to escape. With the truth about his corruption exposed to the public, Mayor Hill knows that his career is ruined and as such, James Gordon is instantly reinstated as Police Commissioner.

Finally, Batman returns to the Batcave with his name cleared. Nocturna has taken Robin to the cave, where she will finally allow the kid to stay. Despite all this, Batman knows there is someone else who needs retribution for the damage done and going alone, Batman meets with Tina and he clears his name on her blind eyes by showing her the light of the real Batman.

Retrieved from "https://dc.fandom.com/wiki/Batman_Vol_1_381?oldid=2409364"
Community content is available under CC-BY-SA unless otherwise noted.