My name's Nightwing! I may not be the gent you were expecting, but let me assure you... like him, I'm the stuff of nightmares. So don't get stupid! If you play it cool, you may walk away from here wil all your teeth.

Synopsis for "White Gold and Truth" 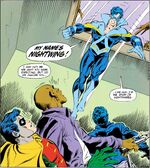 Nightwing to the Rescue

Not long after Jason Todd became the new Robin, he started chasing crooks by himself. Recklessly, Robin follows a drug ring to their hideout, hoping to capture them all. Unfortunately for him, he is spotted and attacked by members of the gang, who take him down and prepare to beat him, when suddenly, Nightwing comes to the rescue and beats the criminals to a pulp. However, the heroes soon realize that they have no evidence to capture the criminals as the drugs have not arrived to their hideout yet. Nightwing and Robin are forced to leave the place, after which Nightwing scolds Robin for being too impulsive and foiling his attempt to capture the gang. Before parting ways, Nightwing tells Robin to give Bruce a message of his visit to the Batcave the next day.

A very confused Jason informs Bruce about his encounter with Nightwing and so he learns that Nightwing is Dick Grayson, the first Robin. At first, Jason is afraid Dick might want to return to his rightful place, but Bruce knows better. In the morning, after Jason has gone to school, Nightwing arrives at the cave and Alfred greets the young man after he first departed from Wayne Manor. Then, Nightwing meets Batman in the Batcave's Trophy Room, where he takes off his mask and approaches his mentor, guardian and role model to have a conversation after eighteen months of absence.

Batman is shocked at the sudden visit, but Dick reminds him that they spent six years as Batman and Robin, "The Dynamic Duo", and it is about time to settle things between them. Dick then remembers the encounter they had with the Joker, in which he was injured in the shoulder by the madman's bullet. After this incident, Batman denied Dick the chance to continue his career as his sidekick, saying he could no longer expose a youngster to such dangers, effectively shutting him off his life. Disheartened and without any certain future, Dick left Wayne Manor with some money provided by Alfred. After this, he went on and started college, only to fail after the first semester. Like this, Dick started a cross country journey, where he met the Teen Titans, a group of young sidekicks, who like him, had no certain future ahead. After a few adventures with his new friends, Dick decided to drop the Robin mantle and adopted his new identity as Nightwing, leader of the Teen Titans. Everything seemed fine, until certain day, Dick looked at the newspapers and learned about the new Robin.

Having told Batman his story, Dick demands to know the reason why the man who wouldn't risk a 19-years old partner's safety, suddenly gets a new 12-year old sidekick to fight crime. Batman finds it hard to explain the reasons. At first, he tells Dick that he could no longer be a sidekick and that he needed to move on, but Dick knows that is not the truth. Bruce then tells him Jason's background as a street kid, whose life was doomed until he took him in. Still, Dick knows that is not the truth. Frustrated, Bruce tells Dick that Batman needs a Robin, but this lie doesn't convince Dick either. Finally, Bruce can no longer contain his sadness, which disguised as anger, comes out as the painful truth: Bruce admits he was lonely and he missed Dick. After this confession, Bruce asks Dick to leave the cave, for their own good.

Later that night, Robin goes out again to find the criminals that slipped away the previous night and he meets with Nightwing, who is also on the trail of the crooks. At their meeting, Nightwing gives Jason his Robin costume, which will be useful when Jason grows up. Nightwing also gives Robin his phone number in case he needs to talk, knowing the throes of being Robin and Bruce's unwillingness to talk openly. After this, Nightwing and Robin decide to work together to capture the drug ring and this time, their combined forces are too much for the crooks, who are easily defeated by the two masked heroes. With the evidence at hand and the crooks rounded up, Nightwing and Robin shake hands while perched on the ledge of a nearby rooftop, Batman watches the scene with a smile on his face, grateful for Dick Grayson's presence.

Appearing in "White Gold and Truth"

Retrieved from "https://dc.fandom.com/wiki/Batman_Vol_1_416?oldid=2525728"
Community content is available under CC-BY-SA unless otherwise noted.