"Ten Nights of the Beast!"

Ten Nights of the Beast!

Good God! This Monster is loose in my town!

Synopsis for "Ten Nights of the Beast!" 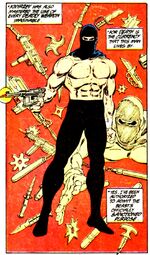 The super assassin known as The KGBeast has come to Gotham City. Agent "Andrei Yevtushenko" of the KGB arrives at Gotham to issue a dire warning. While Mikhail Gorbachev cleaned up a lot of the Russian government, a dangerous top-secret extremist KGB cell that had just been dismantled, "The Hammer," managed to send its top assassin on one last unapproved mission. Codename "The Beast," nicknamed "The KGBeast" by the FBI, an unstoppable killing machine, has come to Gotham City to kill nine people crucial to the American Strategic Defense Initiative (the "Star Wars Program"). He is working with the aid of a Shi'ite terrorist, "Nabih Salari". Yevtushenko was sent by the Soviet government to warn them because the Russians do not want an international incident.

The team established to stop the KGBeast consists of Gotham's own Police Commissioner Gordon, CIA Agent Ralph Bundy, FBI Agent Keith Parker, all of the men respectively at each of their disposal, and unannounced as of yet, the Batman himself.

Gordon is surprised to hear that the KGBeast has already killed two of the people on his hitlist, deaths which the GCPD had investigated and found to be accidental. SDI Senior Administrator "Michael Roberts" appeared to have had a fatal heart attack in his sleep. Scientist "Terry Cavanaugh" was decapitated on motorcycle by a wire strung across the highway between two telephone poles at neck height (this was believed to be a teenage prank gone horribly wrong).

Batman leaves to warn the third man on the list, a "Jason Greene," but arriving at his work place finds him being thrown off the roof by the KGBeast in mid-swing. Batman is forced to let go of the Batrope to catch Greene, and fall down the side of the building with nothing but tumbling, the features of the building itself, and whatever cushion he can find at the bottom to help ease his descent. At the bottom, Batman finds Greene's neck is broken, which he assumes probably happened before the KGBeast threw him. Later, laser technician "Dennis Kane" is electrocuted in his workplace by Nabih Salari disguised as a janitor.

Although Keith Parker finds it reprehensible to work with vigilantes, Ralph Bundy is much more used to dealing with shady characters for the greater good, and he, Gordon, Batman and Robin have their own meeting in the park. Batman tells Robin that in a city where he has a million places to hide, the only way to catch the Beast is to make him come to them.

Appearing in "Ten Nights of the Beast!"

Retrieved from "https://dc.fandom.com/wiki/Batman_Vol_1_417?oldid=2547491"
Community content is available under CC-BY-SA unless otherwise noted.