"Ten Nights of the Beast - Part 4": Following the trail of the KGBeast, Batman finds Ambrose Dearling, the weapon manufacturer and engineer, dead in his workplace; killed at the hands of the Beast, who has now a new weapon to replace hi

Batman: Ten Nights of the Beast

Ten Nights of the Beast - Part 4

A few years ago I would have jumped at this chance to test myself against you. But time has taught me many valuable lessons. There's no reason for me to risk my life, coming in there after you. It would neither accomplish nor prove anything worthwhile. - Sometimes you have to ignore the rules. Sometimes circumstances are such that the rules pervert justice. I'm not in this business to protect the rules. I serve justice.

Appearing in "Ten Nights of the Beast - Part 4"

Synopsis for "Ten Nights of the Beast - Part 4"

Following the trail of the KGBeast, Batman finds Ambrose Dearling, the weapon manufacturer and engineer, dead in his workplace; killed at the hands of the Beast, who has now a new weapon to replace his own missing hand.

The next day, the President of the United States of America, Ronald Reagan arrives at Gotham City and he is taken by force by Batman, to the safety of Commodore Hotel. At the Hotel, Batman, Commissioner Gordon, CIA Agent Bundy and FBI Agent Parker, inform the President of the Beast's threat. Batman informs everyone of his plan to transport the President by helicopter and Parker soon leaves the place after making the proper arrangements. With Parker gone, Batman reveals that this plan is a decoy as he knows there is someone inside Parker's team who is working for the Beast and giving him vital information. Like this, Batman reveals the real plan to the rest of the team.

That night, Parker and his men get ready to transport the President on a helicpoter when they are suddenly attacked by the terrorist Salari, who works with the Beast and means to kills Reagan. Gliding towards the helicopter before it could take off, Salari carries several explosives attached to his body on his own kamikaze attack. His aim is disturbed by the timely intervention of Robin, who swings by and kicks the terrorist out of the way, forcing the man to fall to his death on the streets below. In the midst of the event, Parker realizes that the "President" is in fact Commissioner Gordon in disguise.

Meanwhile, Batman and "President Reagan" have made it to the Convention Center, where the President is bound to give an speech. It is then that the traitor reveals himself as Agent McDonald leads Batman and the President to a backstage alley, where they are ambushed by the Beast and McDonald himself. Batman had already deduced this and they were prepared with bulletproof vests. When KGBeast and McDonald fail to kill Batman or the President, Agent Bundy appears with backup and in the struggle, McDonald is killed. 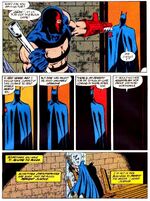 KGBeast attempts to escape using the sewer system, but Batman gives chase to the killer. On his path, Batman finds the rest of Parker's team, murdered in cold blood until he eventually comes across the KGBeast. A fierce battle ensues and Batman is barely able to contain the Beast, who has the upper hand thanks to his new hand weapon. Batman manages to jam the Beast's gun and afterwards, he breaks the weapon's bayonet, forcing the KGBeast to attempt an escape once again. Fortunately, Batman had previously been down in the sewers and he knows that the Beast is heading for a dead end. Truth to his deduction, KGBeast finds himself trapped in a storage room and he turns to challenge Batman to a fight to the death, but Batman has no intention of fighting. Given the circumstances and making a last minute decision, Batman locks the KGBeast inside the room and leaves the man to his own luck, before returning to the Convention Center.

Back at the Center, Batman informs Bundy and Parker about the many agents deceased in the sewers, but he tells them not to worry about the Beast anymore. Bundy is thankful for Batman's efforts and to the mysterious impersonator of Ronald Reagan, who played his part until the very end. Batman takes the compliments, but exhausted and drained, he moves away from the place to a vehicle waiting for him outside the building. Once inside the car, Batman commands Alfred to drive back to Wayne Manor and to remove his disguise for good, as Alfred was still wearing the mask of the President of the United States.

Retrieved from "https://dc.fandom.com/wiki/Batman_Vol_1_420?oldid=2403537"
Community content is available under CC-BY-SA unless otherwise noted.