I guess I spooked him. He slipped.

Synopsis for "The Diplomat's Son"

Robin hears a woman scream while he's on patrol, and he breaks through an apartment window. He finds a man named Felipe Garzonas sexually assaulting a young woman with a black eye. Robin knocks Felipe down, but he's attacked by Felipe's stronger bodyguard Juan. Batman arrives to back Robin up and puts Juan through a wall. They take the victim, Gloria Stanson, down to GCPD Headquarters. Gloria reveals that she is a model, and Felipe had her kidnapped after previously assaulting her on their first date. She did not report the first assault because she felt ashamed and she wanted to forget about it. Robin assures her that Felipe will go to prison, but Commissioner Gordon tells him this is not the case. Felipe claims Gloria saw him willingly, and received her black eye when she tripped. It's his word against hers. Gordon also explains that even if they had evidence, Felipe has diplomatic immunity. His father is José Garzonas, the ambassador from Bogatago. Gloria is horrified. Felipe is back on the streets 45 minutes after his arrest, and he's never even booked. 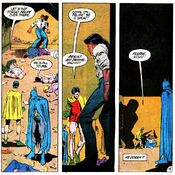 Robin tells Batman that he wants this guy really badly. Batman replies that they can't take him down for the assault, but they can find other ways. Felipe is clearly a cocaine user, and if they can catch him holding drugs they can have him deported. It's not much of a punishment, but it's the most they can do. Using the Batcomputer, they learn that the C.I.A. suspects José Garzonas of smuggling cocaine into the U.S. They stake out Felipe's apartment waiting for him to slip up. Robin paces angrily while Batman tries to teach him the importance of patience.

They finally catch Felipe going to see his supplier, and they take down the room full of drug dealers. After Batman knocks everyone else out, Robin begs Felipe to resist so he can hurt him. He doesn't. Felipe is back on the streets an hour after his arrest, but this time they at least got him booked. His deportation will take several days. Felipe uses the phone at police headquarters to place another threatening call to Gloria. Robin shouts "You animal! You dirty stinking animal!" and leaps to attack Felipe. Batman holds him back, saying he's not worth it. Gloria does not pick up when they call, so they swing to her apartment. They find her dead, having hanged herself.

Did Robin push him?

When Batman is done calling the police, he sees that Robin has gone. He realizes Robin must have gone to Felipe's apartment. Robin finds Felipe home alone, enjoying his last days in Gotham while he sips liquor on his penthouse porch. Batman arrives just in time to see Felipe falling to his death. Robin meets Batman's eyes and then looks away. Batman asks him "Did Felipe fall... or was he pushed?" Robin replies, "I guess I spooked him. He slipped." Batman frowns as Robin swings away.

Appearing in "The Diplomat's Son"

Retrieved from "https://dc.fandom.com/wiki/Batman_Vol_1_424?oldid=2799917"
Community content is available under CC-BY-SA unless otherwise noted.