"A Death in the Family - Chapter 5": After the explosion, Batman searches among the ashes and rubble of the warehouse where Robin was supposed to be along with his real mother Sheila Haywood. Batman has arrived

A Death in the Family - Chapter 5

Now isn't this touching! My old pals Superham and Batpest, have come to congratulate me! It's true guys. I'm the new Iranian Ambassador to the U.N.! Eat your hearts out.


Appearing in "A Death in the Family - Chapter 5"

Synopsis for "A Death in the Family - Chapter 5"

After the explosion, Batman searches among the ashes and rubble of the warehouse where Robin was supposed to be along with his real mother Sheila Haywood. Batman has arrived too late to prevent the bomb from exploding and now the only thing he has left is hope.

Batman remembers how he met Jason when the kid was trying to steal the wheels of the Batmobile, and almost managed to if not for Batman's arrival. After learning that Jason was an orphan, Batman took him in and revealed all his secrets to him, hoping to replace Dick Grayson as the new Robin. Batman trained him, and soon they were fighting crime as the dynamic duo; but Bruce noticed a difference between Dick and Jason. 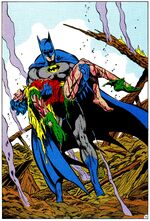 Jason Todd is dead
While Dick was very talented and natural when fighting crime, Jason was full of repressed anger and he had a rebellious nature. Jason's attitude would put him and Batman in danger on many occasions, leading to Batman placing him on inactive duty. During this time, Jason found evidence that his real mother was still alive and so, Batman and Jason traveled to Lebanon to find her.

After searching for a while, Batman finds Sheila in a dying state. She tells Batman what happened with the Joker and before dying, she regrets her actions but is proud of Jason. She dies in Batman's arms and the Dark Knight keeps searching for Jason. Moments later, Batman finds Jason's body lying on the ground and after taking his pulse, he finally realizes that Jason is dead. Batman holds the kid's body in his arms and sadly, he carries it away.

Meanwhile, Joker makes a deal with the leaders of the Iranian Government.

Batman cleans the whole place and hides the evidence of what happened so the authorities wouldn't find anything suspicious. Bruce then takes the bodies of Jason and Shelia on his plane back to Gotham City. Before leaving, however, he examines Joker's hideout, but finds only the dead bodies of Joker's own henchmen and a message for Batman, telling him where to meet him. 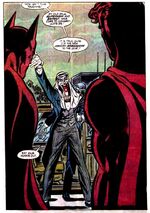 Back in Gotham, few people attend the funeral of Jason Todd and afterwards, Bruce goes to the Batcave, and looks for the address that Joker gave him and it turns out that the clown wants to meet Batman at the United Nations Building in New York City.

Batman is waiting for the Joker to show up when out of nowhere, Superman appears and tries to persuade Batman to leave the place in order to prevent an international incident. Batman doesn't understand Superman and punches him in the face, breaking some bones of his hands. Superman tries to explain better, but at that moment, Joker arrives at the place and reveals that he is the new ambassador of the Iranian Government to the U.N. and thus, he can't be punished by any of his past crimes due to the diplomatic immunity granted to any ambassador. Batman watches in disbelief as his greatest foe stands in front of him, mocking him after killing Jason.

Retrieved from "https://dc.fandom.com/wiki/Batman_Vol_1_428?oldid=2511446"
Community content is available under CC-BY-SA unless otherwise noted.