"Batman Year 3 - Changes Made": Just hit by a missile, the building containing mobsters and Batman, who tried to warn them, explodes. The helicopter that fired the missile flies away, it's occupants sure that "nothing could've survived in there"

We're seeking justice, Alfred. How can that ever be a mistake?


Appearing in "Batman Year 3 - Changes Made"

Synopsis for "Batman Year 3 - Changes Made"

Just hit by a missile, the building containing mobsters and Batman, who tried to warn them, explodes. The helicopter that fired the missile flies away, it's occupants sure that "nothing could've survived in there".

Nightwing, searching for Batman, finds a bar he has recently ransacked looking for information on the gangland murders, beating one patron until he could no longer speak. He calls an ambulance, and getting the same information without threats, races to the same site Batman is at, where he finds the rubble of a destroyed building. He recovers a less than grateful Batman, who nearly calls him Robin, from the ruins who says he didn't need his help and claims he'd almost cleared the wreckage on his way to his way to a secret hideout before gruffly walking away.

Elsewhere, Alfred Pennyworth arrives home at Wayne Manor upset that the parole board is going to release Anthony Zucco, blaming himself for not swaying them with his speech. As he walks through a hall way, he apologizes to a photo of Bruce Wayne for allowing a killer to go free and not being there when Bruce needed him as a child like he was for Dick Grayson.

Alfred remembers back to picking up a young Grayson at St. Jude's Orphanage and assuaging Sister Mary Elizabeth's fears that Bruce would be a bad role model because of what's written about him in newspapers. On the drive home, Alfred tells Dick that Bruce was at Haly's Circus when his parents were killed, and explains that Bruce's parents were murdered also. When they arrive at the Manor, Bruce shows Dick around, and during the tour Dick compares their situations in an attempt to gauge when his hurting will stop. 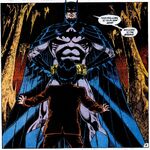 Batman reveals himself
Bruce asks him if he still wants Zucco dead like he did before, to which the young man replies that he doesn't, but he does want to do something to make sure he never hurts anyone again. Receptive, Bruce speaks about seeing the young man's great acrobatic skills and talks about training him. Over Alfred's protestations, Bruce opens the secret passage to the Batcave and the trio enter. On the way down the spiral steps, during which Grayson continually loses sight of Bruce, Alfred tells Grayson that Bruce is likely seeking "continuity", someone to carry on his legacy in case he dies. Through a blinding light, Bruce espouses on the city being corrupt, criminals going free, police being outnumbered and needing help. Asked if he wants to help, he says yes as he sees Bruce Wayne dressed as Batman for the first time and together they train harder than ever before.

In the present, Batman enters the Manor and stalks off into his study, ignoring Nightwing behind him. Alfred, however, talks to him and confirms that his behavior is becoming increasingly erratic and violent and he has taken down every photo of Jason Todd in the house.

Thinking back to better times, Grayson remembers receiving his first Robin costume and going out on his first "public appearance" taking down one of Zucco's front operations.

Grayson enters the study, intending to force Bruce to talk to him this time, only to find he is gone.

Moments later at a restaurant in another part of town, the surviving mob leaders meet to discuss the recent attacks on them. After bringing up and dismissing the idea that it's one of them setting up the kills, one of them suggests an all out assault on the streets, spilling blood to force whomever is doing it to surface. As the idea is discussed, Batman--until recently disguised as a waiter--reveals himself and offers yet another alternative.

Still in prison, Anthony Zucco rashes Taft about the recent parole. Taft tells him it's all set up, and all a matter of having the papers signed, and Zucco warns him that he's planned ten years on how to take over this city using his book with everyone's secrets and doesn't want to see it massed up by a civil servant slip up.

After Nightwing leaves the Batcave, Alfred contemplates how things are going wrong; with Bruce no longer being reasonable, Dick being angry and resentful, and Zucco somehow having gotten someone on the parole board to vote for his freedom--which he has yet to tell Dick. Taking a long look at a handgun laying on his bed, he decides someone has to stop Zucco, as he should never be freed.

Retrieved from "https://dc.fandom.com/wiki/Batman_Vol_1_437?oldid=2553323"
Community content is available under CC-BY-SA unless otherwise noted.