"When the Earth Dies! - Chapter One: Red Square! Bloody Square!": One night in Gotham City, Batman chases down the killer known as Slasher, taking advantage of his expert knowledge of the city and its surroundings. Eventually, Batman captur

"When the Earth Dies! - Chapter One: Red Square! Bloody Square!"

When the Earth Dies! - Chapter One: Red Square! Bloody Square!

Gotham isn't your city, Slasher -- it belongs to its people, not to its vermin.

Synopsis for "When the Earth Dies! - Chapter One: Red Square! Bloody Square!"

One night in Gotham City, Batman chases down the killer known as Slasher, taking advantage of his expert knowledge of the city and its surroundings. Eventually, Batman captures the killer without much effort and the night comes to an end.

Meanwhile, in Russia, the police department of Moscow are investigating what is apparently the newest death in a string of brutal murders. The news reaches Gotham through a representative from Russia, who talks to Commissioner Gordon about the murders committed by The Demon, an apprentice of the KGBeast. The Russian agent wants Gordon to summon Batman and send him on a mission to Russia to stop the Demon, but Gordon explains he doesn't have that influence on the vigilante. Uknown to them, Batman is on a building's ledge eavesdropping on their conversation.

Making arrangements to travel to Russia as Bruce Wayne on a "business trip", Batman goes to a foreign country and goes out on his first night to get used to his surroundings. Meanwhile, during the day, he spends his days as Bruce Wayne, dealing with the business front. While doing this, he runs into Vicki Vale, who is on a photographic assignment in Russia and the two have dinner, which ends with the promise of them meeting back in Gotham. At that moment, Alfred informs Tim that his training has been postponed and he then inquires about Tim's parents, as he was instructed by Bruce. Tim's deductive mind allows him to deduce that there's something strange about the whole situation. 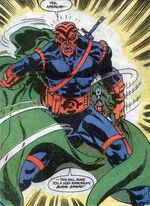 At night, Batman again goes on patrol and after talking to Detective Nikita Krakov, he makes plans and arrangements to capture the Demon. Thanks to information provided by Krakov, Batman lures a couple of thugs to a graveyard, where he scares them both and tells one of them to give The Demon a message on his behalf. Not long after this, The Demon learns of Batman's meeting place and he goes to challenge the man who defeated the Beast. The Demon reveals himself and attacks Batman, telling him of how he was trained to become impervious to pain, allowing him to become the perfect killing machine.

Batman is unable to beat the Demon on his own terms, but that is not concerning to him because the Demon is unaware that he is surrounded by the police. When Krakov and his men reveal themselves, The Demon realizes he has been lured into a trap and escapes through a manhole that connects to the sewers. Batman is unable to stop the criminal, knowing that this is not his city and that The Demon knows every route to escape as much as he knows Gotham's layout. Unsure of what to do, Batman stares at the manhole, knowing that The Demon is already far away.

Appearing in "When the Earth Dies! - Chapter One: Red Square! Bloody Square!"

Retrieved from "https://dc.fandom.com/wiki/Batman_Vol_1_445?oldid=2511452"
Community content is available under CC-BY-SA unless otherwise noted.