""The Broken Bat"": Bruce Wayne enters his study at Wayne Manor and finds Bane waiting for him. He is shocked to find that Bane knows his secret identity. Bane states that he has always known who the Batman was, but that Br

I am Bane -- and I could kill you... but death would only end your agony -- and silence your shame. Instead, I will simply... BREAK YOU!

Synopsis for "The Broken Bat"

Bruce Wayne enters his study at Wayne Manor and finds Bane waiting for him. He is shocked to find that Bane knows his secret identity. Bane states that he has always known who the Batman was, but that Bruce Wayne is merely a façade and the Batman is the true persona. Bane pumps himself full of Venom, in preparation for his final step in taking control of Gotham City. Bruce is disgusted that Bane would kill so many just to gain control of the city, and he sheds his bathrobe, dons his cape and cowl, and leaps into action.

Batman is exhausted from fighting Gotham's criminal underworld non-stop for nearly three nights. Alfred regains consciousness, and Bruce only has time to tell him to escape before Bane wraps his hands around his throat. Unlike Batman, Bane is in top form, and he easily smashes him through the grandfather clock that hides the access hatch into the Batcave. 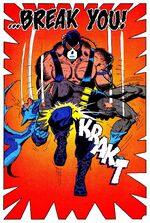 Batman stumbles down the steps and Bane trails after him. Alfred, severely injured, manages to crawl to the front door of the manor and gets to his feet while Bane batters his master around the cave. He begins limping across the yard towards Drake Manor. Tim Drake answers the door and Alfred tells him that they may need an ambulance. Tim gets into his costume.

Shondra Kinsolving tries to reach Bruce on the phone, but gets no reply, as Bane pummels him, determined to break the Batman's spirit. Broken and bleeding, wanting to die, Batman tells Bane to go to hell. Not satisfied with merely killing the Bat, Bane wants to prolong his adversary's agony.

Bane picks Batman up with both hands and then drives him down across his knee, shattering his spine. Satisfied, he let's Batman's crumpled body fall to the floor.

Appearing in "The Broken Bat"

Retrieved from "https://dc.fandom.com/wiki/Batman_Vol_1_497?oldid=2854989"
Community content is available under CC-BY-SA unless otherwise noted.