""Dark Angel I: The Fall"": Batman dangles precariously from a window-washing trolley, with Bane using his own bat-shuriken to fray the rope keeping him from falling to his death. Unfortunately, the rope snaps, and his [[Batrope|

Synopsis for "Dark Angel I: The Fall"

Batman dangles precariously from a window-washing trolley, with Bane using his own bat-shuriken to fray the rope keeping him from falling to his death. Unfortunately, the rope snaps, and his grapple finds no purchase. Desperately trying to slow his fall, Jean-Paul kicks out from the wall, hoping to make it to the fountain in the middle of the atrium. The water in the fountain is shallow, and does little to break the fall. Batman is injured and weakened, giving Bane an opportunity to escape without being chased.

Later, Robin arrives in the Batcave to find Jean-Paul trying to stretch out his injuries. Robin makes another attempt to convince Jean-Paul that he is being too brutal. Jean-Paul claims that he fighting fire with fire by meeting with them on their level. Tim refuses to be a party to this new Batman's way of doing things, and Jean-Paul is unconcerned when his erstwhile partner leaves. He uses his time alone to let himself be taken by the mental programming of the Sacred Order of St. Dumas to design a new Batsuit.

Elsewhere, a wounded Bane sneaks into the location where his henchmen have been detained, demanding to know where he can find Venom to help him heal and feel no pain. He refuses to break his men out, saying that this new Batman is his to destroy.

Robin broods outside Wayne Manor when he is interrupted by Nightwing. Nightwing is annoyed to have heard from Oracle that Bruce Wayne was injured rather than from Bruce himself. He is further annoyed to hear that Bruce chose Jean-Paul to replace him rather than himself (despite his lack of desire for the role). Robin blames himself for Jean-Paul's turn for violence, wondering if he somehow aggravated his susceptibility to The System. Nightwing states that because Bruce chose Jean-Paul, they must abide by his decision. Robin silently vows to make one more attempt to appeal to his former friend's good sense.

In Santa Prisca, Bruce and Alfred discuss the positive influence of Dr. Shondra Kinsolving on Bruce as Batman, in the weeks leading up to his defeat by Bane. Alfred tries to reassure Bruce that his defeat was not a failure, but he will not hear of it. Regardless, they try to remain focused on their plan to rescue Shondra and Jack Drake from their kidnappers.

Back in Gotham City, Bane breaks into the control room for the giant LED message board in Gotham Square, kills the controller, and prepares to make a statement. Meanwhile, Robin returns to the Batcave to find Jean-Paul gone. He happens to see one of Jean-Paul's drawings, and is taken aback by what he sees.

Appearing in "Dark Angel I: The Fall" 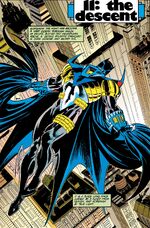 As Jean-Paul Valley tests out his new Batsuit over Gotham City, Bane delivers a message to him via the giant LED message board in Gotham Square: "Batman" Now. Down below, the GCPD searches for Bane. When Batman arrives, they assume that round two of their battle will soon commence.

Bane bursts through the sign and faces Batman. Despite the fact that the GCPD's snipers could take Bane out right there, Kitch makes them stand down on orders from the mayor to follow procedure to the letter. Meanwhile, the Commissioner arrives on the scene, and is the only person to notice the scare-quotes around the word Batman in Bane's message.

Jean-Paul and Bane come to blows in a brutal and violent brawl. Despite Batman's apparent advantage, Bane's Venom dependency gives him an edge. However, Jean-Paul recognizes that Bane's dependency is also a weakness. He severs the tubes which feed the Venom into his enemy's veins, and weakened, Bane runs.

Bane escapes onto a passing train car, but does not get far enough to evade Batman, who bursts through the window and continues the fight. Meanwhile, Robin rushes onto the top of the train car, hoping to separate their car from those filled with innocent passengers. He uses an explosive capsule to destroy the link between the cars and save the citizens.

Unfortunately, without the weight of the other cars to hold it back, the main car in which Bane and Batman are fighting speeds down the tracks too fast and flies right off the track at a curve, crashing into a nearby building. Bane crawls out of the wreckage, hoping to find more venom to help him fight. In his weakened state, he is easily hunted down by Jean-Paul, who finally prepares a killing blow.

Watching from afar, both Robin and Commissioner Gordon hope that Batman will stop himself from murdering the man who broke him. Bane begs for death, but Jean-Paul relents to Robin's relief, stating that he has broken Bane, and that Blackgate Penitentiary can hold the pieces. Despite his reservations about Jean-Paul's methods, Robin confirms, finally, that Jean-Paul has earned the right to wear the mantle of The Batman.

Retrieved from "https://dc.fandom.com/wiki/Batman_Vol_1_500?oldid=2855004"
Community content is available under CC-BY-SA unless otherwise noted.