Part of the "Batman: Knightquest" event.

If it's still him, he's changed. He took Bane down, but he didn't survive the encounter... not as the same man. 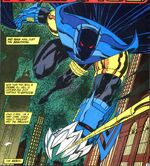 Jean-Paul Valley has another vision of Saint Dumas, the patron saint of a secret order to which his father belonged, and with whose tenets he was indoctrinated since birth. The apparition commands Jean-Paul to cast aside his training as an assassin, and take up a more noble directive: to become a protector and defender of life, and do justice to the name of Batman. This is to be his crusade.

With Bane defeated, the organized crime leaders of Gotham City are vying for power. Don Mercante meets with his men in a restaurant after hours, not expecting his rival Santos Varona to make a move yet. However, Varona has hired thugs to kill Mercante, and the Batman watches as they break into the restaurant and immediately open fire on Mercante's men. He throws a smoke grenade into the restaurant, and ruthlessly beats Varona's thugs before they can kill Mercante. Batman threatens Mercante, hoping to use him as an insider to get information about organized crime in Gotham.

In the Batcave, Jean-Paul is startled by the appearance of Robin, who has picked the locks in Wayne Manor in order to bypass the wall that Jean-Paul erected in the passage connecting to the cave from Drake Manor. Tim warns that despite the fact that he has accepted Jean-Paul as Batman, he still has problems with who and what Jean-Paul thinks the Batman is.

Jean-Paul is more concerned that his security has been breached, and warns Robin not to get in his way before driving off to meet Commissioner Gordon atop Gotham City Police Headquarters. Gordon is concerned that Batman allowed Varona's thugs to kill Mercante's men at all, and furthermore that he had savagely beaten them, cutting them with the razor-sharp claws on his Batsuit. When Gordon tries to indicate that he senses that Batman is acting differently from the man he had come to trust, Jean-Paul simply leaves.

Mercante chooses to double-cross Batman, and meets with his fellow crime lords. He suggests that their unified goal should first be to kill the Batman. When the others doubt him, he reveals that he has already hired a super-soldier who was formerly sponsored by the government, and uses a method of self-hypnosis to kill like a machine: Mekros. As a sign of good faith, Mekros offers to kill Varona for free - which he does with significant ease.

Batman visits Mercante in his home, to extort information from him, but realizes that Mercante's penthouse is a setup, with Mekros in the building across the street. Batman ducks as a bullet shatters the window and kills Don Mercante instead. Jean-Paul is excited to finally face a new challenge.

Retrieved from "https://dc.fandom.com/wiki/Batman_Vol_1_501?oldid=2803839"
Community content is available under CC-BY-SA unless otherwise noted.