"The Joker's Crime Costumes!": During a charity exhibition about Batman in Gotham City, the Joker becomes aware that a very important part of Batman's crimefighting career is his arsenal of Batsuits, which allows him to conquer every kind

The Case of the Flying Saucers

The Origin of Killer Moth!

Appearing in "The Joker's Crime Costumes!"

Synopsis for "The Joker's Crime Costumes!"

During a charity exhibition about Batman in Gotham City, the Joker becomes aware that a very important part of Batman's crimefighting career is his arsenal of Batsuits, which allows him to conquer every kind of situation. Thus, the Joker decides to start a new crime spree with different costumes. As usual, the first crimes are successful until his scheme is discovered and he is ultimately captured by Batman and Robin


Appearing in "The Case of the Flying Saucers"

Synopsis for "The Case of the Flying Saucers"

When the death of a mysterious person reaches the Gotham City Police Department, Commissioner Gordon calls the Dynamic Duo and soon they start investigating the case. All the clues indicate that the deceased person is an alien from Saturn and Batman soon locates the secret headquarters where Saturnian spaceships are hidden. Using his deductive skills, Batman finds the truth behind the crazy plot and manages to capture a large gang of thugs, who pretended to be aliens in order to extort money from the government.


Appearing in "The Origin of Killer Moth!"

Synopsis for "The Origin of Killer Moth!"

While in prison, one of the inmates collects every piece of information and memorabilia about Batman's greatest feats. Upon his release, the inmate adopts the identity of Cameron van Cleer and becomes a wealthy socialite in Gotham City. Cleer buys a mansion and starts constructing a cave underneath the house. All this with the sole purpose of recreating Batman's arsenal and base of operations. Finally, Cleer is ready for action and he becomes the criminal aid known as Killer Moth. 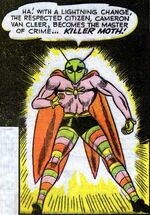 Using his new moniker, Moth contacts the underworld and informs them that he is going to operate exactly like Batman, only he would help crooks instead of capturing them.

Soon, both Batman and Killer Moth are summoned to action and they confront in a duel of wits and equipment. Killer Moth uses his own Mothmobile to knock Batman and Robin unconscious and take them to the Moth-Cave, where he forces Batman to take him the real Batcave or else he would kill Robin. Batman and Moth are on their way to the Batcave and in the meantime, Robin manages to break free and goes to the GCPD Headquarters, where he uses a radio to contact Batman and prevents him from showing Moth the Batcave. Learning that his plan has failed, Moth tries to escape by climbing over a bridge, but Batman follows him closely. They struggle for a few moments until Killer Moth falls to the river below. The police and Batman try to find Killer Moth's body, but it seems as it has vanished away.

Retrieved from "https://dc.fandom.com/wiki/Batman_Vol_1_63?oldid=2701201"
Community content is available under CC-BY-SA unless otherwise noted.