"War Games: Act 3, Part 8 of 8: No Going Back": Black Mask continues his live broadcast from inside the Gotham Clock Tower and the whole city is watching. Black Mask shows to the rest of the world that he has invaded and taken control of the

I was really part of it -- part of the legend. Even if it was only for a little while. No matter what, no one can take that away. I think I need to rest now.

Black Mask continues his live broadcast from inside the Gotham Clock Tower and the whole city is watching. Black Mask shows to the rest of the world that he has invaded and taken control of the Batcave, though he is absolutely incorrect, nobody dares to tell him the truth. Black Mask shows on camera that he and several other crooks working for him, are holding Barbara Gordon, who keeps a defiant attitude towards them, as a hostage and Black Mask sends a message to Batman, challenging him to come and save the girl or otherwise he will kill her.

Batman was watching the message after rescuing the gang "Las Arañas" and he calls the Batmobile to his location and then he proceeds to call all the members of the team and summons them to Oracle's watchtower. When the vehicle arrives, Batman gets inside and tells Tarantula to come with him and they travel fast towards the meeting point.

A few minutes later, the GCPD has established a perimeter around the Clock Tower and several other civil servants are within the boundaries along with reporters and onlookers. The members of the GCPD are unsure of how to proceed and they know that the vigilantes will appear anytime soon. The leader of the police force tells them that they have to target only the members of the organized crime. However, this changed soon after a phone call by Commissioner Akins who gives the order to arrest all the criminals and vigilantes alike and authorizes the GCPD to use deadly force if necessary.

On a nearby rooftop, Robin, Onyx, Batgirl and Catwoman are joined by Batman and Tarantula. Batman gives them instructions to let the police take care of all the regular criminals and to take down any meta-human or supercriminal that starts causing trouble. Meanwhile, Batman takes a secret route into the Gotham Clock Tower.

At that moment, reporter Arturo Rodriguez starts walking towards the exit of the clock tower and on his way he comes by the unconscious bodies of the criminals that Black Mask gathered as part of his master plan. Rodriguez manages to get outside and he tells the police officers that his cameraman, Charlie is still inside and the officers tell him that they are trying their best to rescue him. 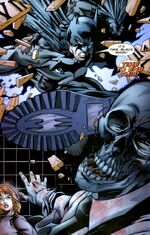 Batman vs. Black Mask; the final duel
Minutes later, Black Mask asks Charlie, the cameraman, if the camera is recording automatically or if it needs him to make it work. Charlie tells Black Mask that the camera is set to record automaically and Black Mask shoots him in the head, killing him as he doesn't need him anymore. Using Charlie's body as a tripod, Black Mask keeps his live broadcast going on and he sends all of his henchmen to deal with any possible intruder that might try and stop his plan. Black Mask then turns his attention on Barbara and approaches her in a threatening way until a big explosion tears down one of the walls and all of his henchmen come through the hole in the wall, falling unconscious to the ground. Black Mask is shocked and before he could react, Batman comes crashing through one of the walls and delivers a strong kick to Black Mask's face as the final confrontation begins.

Right at that moment, Scarecrow recovers consciousness and remembers the pain and agony that Black Mask put him through. With thoughts of revenge, Scarecrow transforms into the Scarebeast once again and starts looking for Black Mask. His search takes him to the exit of the building, where several police officers are terrified at the sight of the monster and they start shooting at random, killing some of their own members. Batgirl and the others get sight of Scarebeast and decide that they must help, but since the police are after them as well, they could risk being attacked. Robin gets an idea and tells them to attack as soon as he creates a distraction.

Just outside the building, is the mobile Batcave, with Alfred and Nightwing inside. Alfred has just finished healing Nightwing's bullet wound on his leg and Nightwing already wants to get out and help the others, but his attempt is quickly dismissed by Alfred, who threatens him with injuring his other leg if he doesn't stay quiet.

Meanwhile, Batman and Black Mask are beating each other with sheer brutality and Barbara tries to make them stop from killing each other. However, Batman refuses to stop as he wants to end the Black Mask once and for all. Barbara tries to remind him that Gotham still needs him because neither Robin or Nightwing are ready to take the mantle of the bat. Batman thinks otherwise and he keeps fighting Black Mask, who is slowly losing the fight.

Outside, Batgirl, Onyx, Tarantula and Catwoman attack the Scarebeast at the same time and before they are attacked by the police, Robin talks to the commander and explains that they are the only people capable to deal with the monster and that he should give the orders to the rest of the officers to stop attacking them and let them beat the monster. Robin promises that after they defeat him, they will surrender and turn themselves in. The commander agrees and gives the order to let them work as they keep beating Scarebeast. 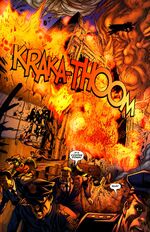 The Destruction of the Gotham Clock Tower
As Batman and Black Mask give no sign of stopping their massacre, Barbara decides to end it all and activates a destruction sequence that starts detonating bombs all over the structure of the Clock Tower. Batman has almost finished with Black Mask, but Barbara makes him realize that since the destruction of the building is imminent and there is no easy way out, she is going to die unless he stops fighting and saves her from dying. The whole building starts crumbling and the fire has reached the main room. Batman drops the beaten body of Black Mask and looks at Barbara who is begging for him to save her, shedding a tear of desperation. A final explosion makes the Clock Tower collapse and the people outside run away from the site as rubble and fire keep spreading around the place. Batman's shadow is seen going out of the building and taking a body with him. However, nobody else is looking.

A few minutes later, the fire is extinguished and there is only ashes in the place where once stood the Gotham Clock Tower. Robin and Batgirl find themselves alone looking for the others, but they realize that they might be already gone and they decide to do the same. One of the police officers tells Robin to keep his promise and turn himself in, but Robin refuses telling him that he lied. Arturo Rodriguez approaches Barbara Gordon, who is lying nearby an ambulance and some firefighters. Arturo asks her how did she managed to survive and Barbara pretends that she doesn't remember how it happened and that she is very confused as to why Black Mask believed that her "tech company" could be the secret headquarters of Batman, who she also considers to be a very bizarre creature. Rodriguez then carries Barbara to a safe place.

A few feet away, Batman is recovering from the feat when some police officers approach him and ask him to surrender. Batman tells them that there are hundreds of other casualties that need attention and that they shoudn't be wasting time with him. While Robin helps the firefighters in the rescue efforts, Batman wants to go and make sure that Black Mask didn't survive the explosion, when he is contacted by Leslie Thomkins, but the intercom is too damaged to hear what she's saying and all that Batman gets is that something's happening at her clinic concerning Spoiler. Before leaving, Batman glances at Robin with guilt and sorrow.

A short time later, Batman arrives at the clinic and Leslie tells him that Stephanie won't survive and that she has very few hours. Leslie takes Batman to Stephanie's room and leaves them alone. Stephanie looks very injured and is barely able to talk and when she does, she blames herself for starting the gang war and she want to know if Tim hates her and she speaks about the baby she had a few years ago. Batman tells her that Tim actually adores her and that he would make sure that her baby doesn't miss anything in life. Finally, Stephanie asks Batman if she was given the role of Robin because of her merits and that if she was ever truly Robin. After listening from Batman that all of it was true, Stephanie feels glad for being part of the legend of Batman and Robin, even if it was short-lived and she decides that she must rest now. Stephanie closes her eyes and tears comes from her eyes as her heart stops beating.

The next morning, Arturo Rodriguez reports from the ruins of the Clock Tower, the events of the previous night and he also tells that the war has finally stopped. He blames not only the criminals, but the vigilantes as well for not being present during their darkest hour, for all the losses and casualties and for disappearing as soon as the situation calms down. Batman can't agree with him as Arturo doesn't know all the sacrifices that they have been through. Batman leaves the clinic and before leaving he tells Leslie that he and his group will always be present in every war that might come. Leslie doesn't speak a word and stares at the Batmobile as it goes away, with guilt in her eyes.

Two days later, several leaders of gangs and mob bosses have gathered in a building and are waiting outside of some important room. They are given instructions to pledge loyalty and move on. As the doors open, all the gang leaders, one by one, approach Black Mask, who is sitting on a big chair, and they recognize him as the uncontested boss of bosses in Gotham.

Retrieved from "https://dc.fandom.com/wiki/Batman_Vol_1_633?oldid=2511520"
Community content is available under CC-BY-SA unless otherwise noted.