"Under the Hood, Part 1: New Business": A homeless man sits on the sidewalk under the pouring rain with a tough attitude. The man believes he has seen enough to surprise him anymore, when suddenly drops of blood land on his face and he can't even imagine what is happen

"Under the Hood, Part 1: New Business"

Under the Hood, Part 1: New Business


Appearing in "Under the Hood, Part 1: New Business"

Synopsis for "Under the Hood, Part 1: New Business"

A homeless man sits on the sidewalk under the pouring rain with a tough attitude. The man believes he has seen enough to surprise him anymore, when suddenly drops of blood land on his face and he can't even imagine what is happening five stories above him.

Batman vs. Red Hood
Batman is fighting against a new criminal that wears a biker outfit and a red helmet that covers his entire head. The criminal is highly skilled and has already caused Batman several injuries and wounds. The man cuts through the Utility Belt and the Batsuit using a special blade and he also talks to distract his opponent. Batman grabs the man and tosses him off the edge of the building and after the man stops his fall by stabbing the blade into the building's wall, Batman smashes him with some flying kicks from above. Both of them fall to the ground and Batman lands on top of the criminal, stating that the battle is over. The criminal replies that the battle is far away from being over and he cuts the cowl of the batsuit, taking it off and leaving Bruce unmasked. The criminal mocks at him and decides to remove his helmet in order to be even and when he does, Bruce can't believe what he sees.

Alfred walks around Wayne Manor, remembering the past events that ended up with the destruction of several ties in the Batman Family and the death of Stephanie Brown. Alfred then goes to the Batcave, where Bruce is using the Batcomputer doing some important research. Alfred tells Bruce that Lucius Fox is looking for him and Bruce tries to make Alfred get rid of Fox, but Alfred tells him that after persisting for a very long time, Lucius Fox has decided to come all the way to Wayne Manor and that he is not leaving until he talks to Bruce.

Bruce meets Lucius and the latter tells Bruce that Wayne Industries' Reseach and Development Division was the target of a hostile takeover by some German corporation that bought the majority of the stockholders from various American companies and that Bruce Wayne has been removed from the board of directors. Afterwards, Bruce goes back to the batcave and explains the situation to Afred, who thinks that there would't be much damage to Bruce's activities as Batman since he already have plenty of gadgets and high-tech equipment. However, Bruce's concern isn't on the lack of future equipment, but on the selling and distribution of his previously designed weapons and technology to psychotics, terrorists or immoral governments. After this, Batman goes out to work.

Meanwhile, a criminal meeting is taking place on an abandoned warehouse. There are eight criminal leaders on the meeting and all of them are drug dealers in Gotham. However, once they are all gathered, nobody knows who arranged the meeting and things start to get heated until they are stopped by one man from a catwalk above them. The criminal, who wears the red helmet, shoots at the table the drug dealers are sitting by and then he explains that they were summoned by him. He explains that he wants them to give him 40% of their profit in exchange for protection against Batman and the new crime lord in Gotham, Black Mask. The only condition of the deal is that they will never, under any circumstances will sell drugs near schools or directly to kids. The criminals start to rebel against the proposal and the man in the red helmet throws a bag on the table; with the heads of all the liutenants from their respective gangs. He explains that it only took him two hours to do it and he tells them to imagine what he could do with a whole evening. After that, he tells the criminals that he is not giving them a choice, but instead they have to do as he says or pay the consequences. With a final shootout, the man in the red helmet disappears and the drug dealers seem to be fine with the proposal. 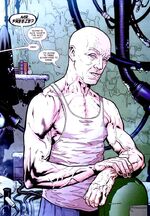 Mr. Freeze joins Black Mask
At that moment, Black Mask is going to Gotham's Meat Packing District and his assistant, tells him that someone has made a move on the drug trade. Black Mask disregards the activity as something small and not important enough for him to take action. Instead, he is willing to allow the new player to make his move and if he ever proves to be a challenge, he will quickly take care of him by joining him to his gang or eliminating him. Black Mask stops on an abandoned building and goes inside with his assistant following him. The assistant asks why are they in that place and Black Mask replies that they are going to recruit someone. They walk inside and Black Mask opens a door that leads to a cold room and he talks to the man waiting inside. Black Mask makes him an offer to join him and be able to kill several people in exchange of money, and Mister Freeze agrees to join, but he demands to be given need something to wear, referring to his Cryo-Suit.

Retrieved from "https://dc.fandom.com/wiki/Batman_Vol_1_635?oldid=2511522"
Community content is available under CC-BY-SA unless otherwise noted.