"Under the Hood, Part 2: First Strike": Batman patrols Gotham City and he stops a criminal making illicit deals. Batman hungs the man upside-down and leaves him there, thinking about how easy things were before, when he and all his team

"Under the Hood, Part 2: First Strike"

Under the Hood, Part 2: First Strike

I like to keep the lights on. That way I can always see who's at the table. That way, there are never any surprises.


Appearing in "Under the Hood, Part 2: First Strike"

Synopsis for "Under the Hood, Part 2: First Strike"

Batman patrols Gotham City and he stops a criminal making illicit deals. Batman hungs the man upside-down and leaves him there, thinking about how easy things were before, when he and all his team could rely on Oracle, but now that she's gone and her headquarters were destroyed, things have become a bit more complicated.

Batman is standing on the top of a building and he is soon joined by Nightwing, who is still recovering from his wound on his leg, but is able to jump and run very well. Batman is curious as to why is Nightwing still in Gotham since he used to work exclusively in Bludhaven and New York. Nightwing replies that he just wants to stay close to home for a while and he joins Batman on a mission as they start moving across the city.

Meanwhile at the Hanover Tower, a technician is making a new Cryo-Suit for Mister Freeze and he tries to lecture the villain on modern technology and equipment. Outside of the room is Black Mask, waiting for Freeze's suit to be complete. Sionis' assitant, David, suggests that recruiting Freeze was a bad idea and Black Mask replies that it wasn't. David also informs his employer about the new criminal in town and that he is going by the name of Red Hood; however, Black Mask already knows as he is looking a picture of the man on his computer. At that moment, a lab assistant comes out of the cold room and informs Black Mask that Freeze has killed yet another technician. Freeze's new cryo-suit is complete and Black Mask is more than happy to count with Freeze on his side.

Moments later at the Gotham Docks, a big shipment is unloading and the operation is heavily guarded by several hired mercenaries, armed with big guns. Batman arrives and quickly takes one of them out with no effort and soon all the other mercenaries start shooting at him. Nightwing arrives just in time to help Batman with all of them and soon, the original dynamic duo get the situation under control. Batman and Nightwing get inside the ship and open one of the packages only to find a stash full of weapons from notorious criminals like Joker, Captain Boomerang, Mr. Freeze and more. When Nightwing opens a second stash, a bomb is activated and they have enough time just to jump out of the ship into the water outside. The bomb blows the ship almost entirely and the duo reach the shore with some difficulty. 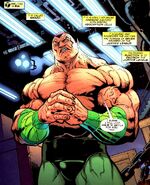 Amazo
Batman spots a man standing on a nearby rooftop and they start chasing him, just as the man starts running. Red Hood keeps the distance between Batman and Nightwing and his agiity helps him on the hot rooftoop chase. As Batman is chasing Red Hood, he notices that the man moves in a familiar way and when he tries to stop him with a Batrope, Red Hood cuts the rope even before it was taught. Red Hood then jumps into the skylight of a warehouse and Nightwing is impressed by the feat. Batman replies that it isn't something they haven't seen or done before and they reach the warehouse in the same fashion. The whole place is completely dark and Batman tells Nightwing to stay sharp. When the lights are turned on, they are faced by Amazo, the android that possesses the capabilities of some members of the Justice League. Amazo stares at them and prepares to eliminate them both, while Batman keeps repeating the words. "Stay sharp".

Retrieved from "https://dc.fandom.com/wiki/Batman_Vol_1_636?oldid=2153160"
Community content is available under CC-BY-SA unless otherwise noted.